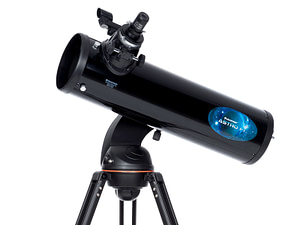 Our Verdict
The Celestron Astro Fi 130 is an exquisite combination of new telescope technology and good optical prowess at a price that won’t break the bank. A telescope that’s suitable for those wanting to take their first steps into astronomy but are unsure of where to start, this reflector serves as a virtual guide to the night sky. The supplied eyepieces are of low quality and the battery lets the telescope down, but both can be rectified with upgrades.

Finds targets at touch of button

The Celestron Astro Fi 130 belongs to a line up of instruments that are relatively new on the market. Suitable for beginners keen on touring the night sky but are unsure of where to start, the Astro Fi series makes use of the latest Wi-Fi technology that enables users to control the in-built computer with their smartphone or tablet using the free Celestron SkyPortal.

The Astro Fi 130 employs a completely “hands-free” experience without the need for a hand control — something that’s sure to delight users and make navigation all the more fun. Some may miss the touchpad that’s supplied with most computerized telescopes, but we have to say that the Astro Fi doesn’t suffer without it.

Related: Best telescopes for the money – 2020 reviews and guide

Celestron Astro Fi 130: DesignVery sturdy build with well constructed tube and tripod Portable and lightweight for on-the-go observationsMakes use of a good parabolic main mirror    The Astro Fi 130 is made with children of 13 years of age or older in mind and we are pleased to discover that — once fully assembled — it provides a fair amount of portability. The overall build is fair for the price and for a telescope of its type: the tube is of good construction, while the aluminum tripod is sturdy and does the job, supporting the entire setup effortlessly as a whole. This Newtonian reflector — similar to the other models in the series — is supplied with Kellner 10mm and 25mm eyepieces, offering magnifications of 65x and 26x respectively — and a red dot finder.

The eyepieces are enough to get a beginner started in astronomy, but with the Astro Fi 130 being a “fast” telescope, we recommend purchasing some mid-range Plössl eyepieces to ensure that the instrument is fully equipped for a variety of targets — whether you prefer observing solar system objects or deep-sky gems such as nebulas and galaxies. Fast telescopes like this one have short focal lengths that provide wider views of the night sky, providing you with a lower magnification for any given eyepiece over “slower” instruments. The optical system employs a main mirror with a parabolic shape.

(Image credit: Future plc/All About Space)Celestron Astro Fi 130: First light and functionality Makes use of SkyAlign technology for easy alignmentGreat for lunar and planetary observing, but some views are fuzzyBattery drains quickly in cold conditionsThe very clear, dark skies of November provided an excellent selection of night-sky targets to test the Astro Fi 130’s mettle. The second planet from the sun, Venus, shone at a brilliant magnitude of -5.1 and had reached greatest elongation east, making it a stunning target alongside Mars, which was easy to spot with the reflector’s 5.19-inch aperture at a subtler +0.5 magnitude.

The Astro Fi uses SkyAlign technology for simple alignment. Aligning your instrument before you begin observations is essential, since it reveals your orientation relative to the night sky to the telescope’s software. With this information, the Astro Fi is then able to slew to your desired night sky target.

Marrying up our smartphone with the telescope’s Wi-Fi was, as expected, quite intuitive. The Celestron SkyAlign technology made aligning the telescope painless as we chose three bright stars to assist with the procedure. The beauty of the setup is that you don’t need to know anything about the night sky to enjoy it, but it does also serve as a tool in learning your way around the heavens — we recommend that you take in as much information about the objects you’re viewing as possible, especially if you or your family are keen on a serious stargazing hobby. If you’re unsure of what to observe on your first night, then the Celestron SkyPortal app recommends objects for you — a feature that will be particularly useful to novice astronomers. However, it is worth noting that, while SkyPortal boasts a catalog of hundreds of thousands of targets, the Astro Fi 130 doesn’t have the optical capabilities to pick out all of them.

On evenings that are especially cold, battery power can be drained quickly and “motorized” telescopes can struggle — that’s something we discovered with the Astro Fi 130 under particularly frosty conditions. We recommend purchasing a 12V rechargeable battery, especially since there’s not really any other option: the Astro Fi is unable to function without the app; manually slewing the telescope is not possible and it must have a source of power in order to operate fully. Sadly this renders the telescope useless should the Wi-Fi facility cease to operate at any given time. However, despite the flaw, we are pleased to discover that the tube itself can be added to another mount, provided it uses a Vixen dovetail attachment, for those who like to switch between manual and computerized slewing of the instrument.

(Image credit: Celestron)Views of the moon are good through the Astro Fi but were not hugely crisp. For a beginner telescope though, this isn’t too much of an issue since the optics provided sufficient magnification of the cratered terrain. We observed our natural satellite in its waning gibbous phase, where the terminator gave splendid sights of a selection of craters and rilles, played up by the sunlight hitting the rugged lunar surface.

Despite light pollution from the moon, the Astro Fi was still able to pick out nearby Venus and Mars with ease. Views of the planets were as expected given the optical range — small but slightly blurry in the field of view. Slowly turning the focuser, we were able to bring a touch of clarity to our view; Mars’ salmon pink disk in particular showed up well, with a Martian pole cap discernible in our field of view.

The focuser isn’t manufactured for fine-tuning, and we were left with views that jumped between observing extremes — something to keep in mind when getting the best sights of your chosen target. Once instructed, the Astro Fi took us to the constellation of Andromeda where we observed its galaxy Messier 31, known much more simply as the Andromeda Galaxy — a pleasant sight that just got better and better and visible as a faint smudge with a glowing bulge at the center.

Celestron Astro Fi 130: VerdictAt an exceptionally low price, the Astro Fi is a good telescope that boasts cutting-edge technology and a decent amount of support for those just starting out in the hobby of astronomy. The telescope is portable, which makes it suitable as a “grab and go” scope, but we recommend taking a reliable 12V power supply with you given the battery’s tendency to lose charge in cold conditions.

Equipped with eyepieces, a red dot finder and a sturdy tripod, everything you need for your observing sessions are included in the package, however, we recommend upgrading several of the accessories to get optimum results from the telescope’s optical system. Solar system views can be slightly blurred if you push beyond the telescope’s capabilities, but — overall — we are impressed with the observing prowess of the Astro Fi 130.

Join our Space Forums to keep talking space on the latest missions, night sky and more! And if you have a news tip, correction or comment, let us know at: [email protected]