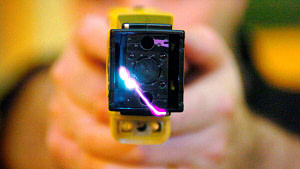 A breakdown of the type of force gardaí used in the exercise of their official duties shows that most involved incapacitant sprays, followed by batons

The use of Taser remained steady, with three instances in December, compared with two uses in November. File photo

Cork City has topped the table for the second month in a row for the garda division with the highest number of cases involving use of force by gardaí, official figures show.

Garda documents show there were 70 ‘use of force’ cases last month in the country in the course of policing various incidents, including public order and drug-related offences.

In response to requests from the Policing Authority, Garda HQ has published a detailed divisional table of the cases.

It shows that in January:

Cork city accounted for 12% of the 70 cases;
Dublin Metropolitan Region South 7%;
Donegal 7%;
DMR West 7%
After that came DMR South Central (traditionally the division with the highest number of cases given it covers Leinster House and the south inner city), along with Cavan/Monaghan and Louth (all 6%).

Of other Munster divisions, Waterford accounted for 5% of incidents, while Cork North comprised 4% of incidents.

A breakdown of the type of force gardaí used in the exercise of their official duties shows that the bulk (56) involved incapacitant sprays, followed by batons (10).

Over half of the cases occurred in public outdoor areas, while a third took place in private homes, mainly houses but also some apartments.

Types of offences where Garda force was used

In relation to the type of offences linked to the use of force, 38% were public order incidents and 17% were drug-related incidents.

A further 11% were traffic-related offences, 9% were in relation to assaults and 7% were linked to firearms incidents.

Some 6% related to incidents where the Mental Health Act was applied and 2% concerned domestic incidents.

Over half of the cases occurred at the weekend and the most common time for use of force was Friday between 12pm and 6pm.

In nine out of 10 cases, the use of force was applied to men.

The detailed table replaces the previous short report issued to the authority.

The total number of cases in January is a drop on December, when there were 117 cases, and similar to November, which saw 77 recorded incidents.

December also witnessed a single lethal use of a firearm, with the fatal shooting by a garda of George Nkencho, aged 27, in west Dublin on December 30.

The use of Taser remained steady, with three instances in December, compared with two uses in November.

Cork City division also recorded the highest levels of force use in December, accounting for 14% (16) of the 117 cases.

Last December was the first time that another division surpassed the DMR South Central for the highest levels of force.