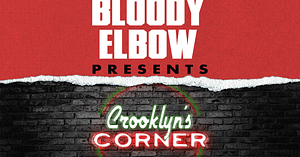 Welcome to Crooklyn’s Corner, the podcast that’s basically a hodgepodge of topics focused on the combat sports and entertainment community. The show will feature special interviews, fantasy matchmaking/analysis and whatever else we can come up with to keep our listeners steeped in fresh and engaging content. The show is hosted by Stephie Haynes and airs when needed to fill gaps in our Bloody Elbow Presents podcast network.

Here is a summary of the topics discussed or questions asked. Time stamps won’t always be available as our conversations tend to be very fluid and bounce back & forth frequently. However, when fantasy matchmaking and analysis is the focal point of an episode, we will definitely timestamp when each fight breakdown begins. As always, I hope you enjoy listening to the show as much as I enjoyed recording it.

EPISODE 10
With Endeavor having 100% ownership of the UFC and an intention to go public, what is the likelihood that we’ll see more details concerning the UFC’s finances?

Explain how Endeavor’s ownership of the UFC affects them financially.

They tried to go public in 2019. What happened there, for those that are unfamiliar with the story, and when do you think they go public, since it looks like maybe they won’t in the very near future as was speculated this past week?

Jones and Ngannou both expressed a desire for a “mega payday” and Jones shot down $8-10M. What was he likely making, and if he were asking for say, $15M, and Francis got similar or even the same, would the UFC be in a position to still make a profit off the event if it did 1M buys?

Is it feasible for more top UFC fighters in massive fights to get boxing-type pay without it being a money-losing venture for the UFC?

How much of a bump do you think Poirier gets going into the trilogy fight? What would you estimate for Conor’s purse?

Everyone is quick to shout “UNIONIZE!” but is that something we’re likely to see in the next 5 years or will it be the anti-trust suit that brings about some sort of change, in the event the plaintiffs win?

What are the updates on the case, if any?

Let’s talk about the Venum deal and why it’s not any better than the Reebok deal. Is anyone going to benefit from this deal outside the lower tier fighters?

BKFC made a statement that they were going to develop a pension plan for their fighters. What do you make of that?

There have been some breach of contract lawsuits in boxing (Salita Promotions, DiBella Entertainment in separate cases) and with it we’ve seen the actual contracts for those boxers, including their minimum purses. Can you describe some of the key differences in a typical boxing contract compared to at UFC contract?

You can check out the entire show here. Remember, if you’re looking for us on SoundCloud or iTunes, we’re under the Bloody Elbow Presents name. Follow Crooklyn’s Twitter account: Stephie Haynes and the show account Crooklyn’s Corner.

If you enjoyed our show, give us a shout out in the comments here on Bloody Elbow, or give us a “like”, share & subscribe over on whichever BE Presents Podcast Channel happens to be your listening platform of choice: SoundCloud, YouTube, iTunes & Apple TV, iHeartRadio, Stitcher, Spotify, TuneIn, OverCast, or Player FM, & NOW AMAZON MUSIC! – While you’re there, don’t forget to subscribe to Bloody Elbow Presents; that way you’ll always be the first to get all of BE’s daily MMA offerings. For previous episodes of the show, check out our playlists on all of our BE Presents channels.