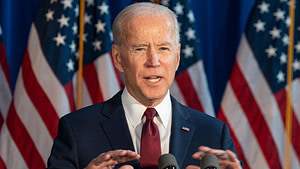 The stock market recovered from Friday’s sell-off, as the tech-heavy Nasdaq composite surged 2.55%. The S&P 500 rallied 1.6%, while the Dow Jones Industrial Average followed up with a 0.8% gain.

Among top stocks in or near buy zones, AdaptHealth (AHCO) broke out past a new buy point and is in buy range, while PayPal (PYPL) continued to rebound from its key 50-day support level. Meanwhile, ServiceNow (NOW) is just under its own buy point.

Apple, Microsoft, PayPal and Tesla are IBD Leaderboard stocks. AdaptHealth was Monday’s IBD Stock Of The Day, while ServiceNow was featured in this week’s Stocks Near A Buy Zone.

Late Monday, President Biden met with a group of 10 Republican senators at the White House to discuss a bipartisan stimulus deal. After the meeting, Sen. Susan Collins said she was “hopeful” about a potential stimulus deal; however, concrete progress was not detailed.

Collins told reporters after the meeting, “I wouldn’t say that we came together on a package tonight … no one expected that in a two-hour meeting.”

On Sunday, the group proposed a $618 billion package, far less than Biden’s $1.9 trillion plan. The Republican plan includes new stimulus checks of $1,000 per person, depending on income level.

Stock Market Pulls Back, Finds Support
Looking back at the current uptrend, November was a key month for the stock market. IBD’s The Big Picture flagged the new uptrend following the market’s bullish follow-through day on Nov. 4. Meanwhile, the start of February has the Dow Jones Industrial Average, Nasdaq and S&P 500 trying to find support near key levels during the current pullback.

Monday’s Big Picture offered some optimism following Friday’s sharp sell-off, “So, the Nasdaq composite’s nearly 2.6% rally on Monday fed a big spoon of encouragement for the bulls. Not only did the premier index for growth stocks retake the 21-day line, it recouped all of the prior day’s losses.”

Due to the recent weakness, it would be a great time to play some defense. Weakness can snowball, so it’s usually best to get off margin to avoid outsize losses. Meanwhile, you can reduce some exposure by cutting positions that show a loss after recently breaking out.

Focus on stocks that showed strong relative strength during last week’s sell-off. They could be some of the market’s leaders if the indexes are able to rebound.

Stock Market ETF Strategy And How To Invest

Shares of the retailer remain below their 50-day moving average line, and about 8% off their 52-week high.

Stocks In Or Near Buy Zones: AdaptHealth, PayPal, ServiceNow
Monday’s IBD Stock Of The Day, AdaptHealth, broke out above a 39.86 buy point in a consolidation base. Shares rallied 4.9% Monday and are in the buy zone that tops out at 41.85.

According to Leaderboard commentary, “PayPal is trading below a new alternate entry (244.35) and making its first test of the 10-week moving average in 2021.”

ServiceNow is approaching a 566.84 buy point in a flat base, according to IBD MarketSmith chart analysis. Shares rallied 2.9% early Monday.

According to IBD Stock Checkup, NOW stock shows a solid 94 out of a perfect 99 IBD Composite Rating. The Composite Rating — an easy way to identify top growth stocks — is a blend of key fundamental and technical metrics to help investors gauge a stock’s strengths.

Robinhood continues to limit purchases in short-squeeze targets, like GameStop and AMC Entertainment (AMC). Robinhood customers could only buy one share of GameStop early in the short squeeze, and five options contracts. However, Robinhood raised that to 20 shares on Monday, CNBC reported.

In January, Nio grew sales 352% to 7,225 electric vehicles. Nio stock reversed from early gains to edge lower Monday. Shares are below their 57.30 buy point in a cup base.

The Jan. 8 IBD Stock Of The Day column signaled that Tesla was flashing several signs of a climax top amid a sharply vertical run over the past few weeks. But so far the stock is showing tremendous resilience after hitting record highs last week.

Dow Jones Leaders: Apple, Microsoft
Among the top Dow Jones stocks, Apple moved up 1.6% Monday, but remains below its 138.89 buy point in a cup with handle. Shares gave up the entry during last week’s sharp weakness.

Be sure to follow Scott Lehtonen on Twitter at @IBD_SLehtonen for more on growth stocks and the Dow Jones futures.