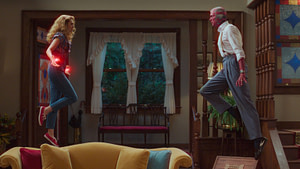 This post includes frank discussion of WandaVision Episode 5 titled “On a Very Special Episode…” If you haven’t yet watched, now is the time to leave.

Unlike the appearance of a de-aged Mark Hamill or tiny baby Grogu on The Mandalorian, the bombshell appearance of Evan Peters as the Marvel superhero Quicksilver in the final seconds of WandaVision this week wasn’t a very well-kept secret. News of Peters’s casting seeped into the fandom groundwater months ago. But that doesn’t mean the implications of his appearance here are any less exciting.

In fact, it’s not an exaggeration to say that this one TV moment has changed everything about the kinds of stories Marvel can tell going forward. Not bad for such a speedy appearance. Why does Quicksilver matter? Why does it matter that Evan Peters is playing him? And, more importantly, what does that mean for Spider-Man 3, Doctor Strange 2, and beyond? Let’s get into it.

You may or may not recall that Wanda Maximoff’s twin brother, Pietro, was played by Golden Globe winner Aaron Taylor-Johnson in the Marvel movie Avengers: Age of Ultron. Pietro, sadly, did not make it out of that movie alive. But what’s a little death in the world of Marvel, right? Especially when Wanda seems to be magically puppeteering the robotic corpse of her boyfriend, Vision (Paul Bettany), through an idyllic New Jersey suburb. So after dropping hints about her brother all season, Wanda finds him, alive and smirking, on her doorstep. Only he’s not played by Taylor-Johnson: He’s played by Evan Peters, who played another version of Quicksilver in the Fox films X-Men: Days of Future Past, X-Men: Apocalypse, and Dark Phoenix. Taylor-Johnson’s Pietro and Peters’s Peter coexisted in completely different cinematic universes, a complicating factor of Marvel and Fox’s odd joint custody of Marvel comics properties.

But when Marvel acquired Fox in 2019, the Disney-owned company took over the rights to the X-Men (and the Fantastic Four), as well as all the mutants that come with them. And so instead of bringing Taylor-Johnson in to play Wanda’s brother, they tapped Peters, implying that somehow—oh, I don’t know; maybe through that scary, throbbing, sky-high energy wall we saw turn red this week—Wanda has ripped a hole in the multiverse and plucked the Peters version of the character out of a different world and into hers to play the role of her brother. Or, at least, someone plucked him.

Listen: Don’t get too spun out by the concept of a multiverse. If you’ve seen the Oscar-winning animated Sony film Into the Spider-Verse, you already know everything there is to know. Multiple parallel universes exist. You can have one Peter Parker voiced by Chris Pine die, only to be replaced by another, more disheveled version of the web-slinger voiced by Jake Johnson. Easy enough!

Marvel chief Kevin Feige indicated that he would be implementing the concept of the multiverse into his storytelling now that the 10-year era of storytelling known as the Infinity Saga has come to a close. In fact, the upcoming Doctor Strange sequel has long-born the subtitle “in the Multiverse of Madness.” Feige has talked about the concept of the multiverse kicking off in WandaVision, extending through the third Tom Holland Spider-Man film, and coming to a head with Doctor Strange. All three movies may or may not involve Benedict Cumberbatch’s Sorcerer Supreme in some fashion.

So what, exactly, does it mean to have the multiverse as a storytelling option going forward? Well, it means everything is on the table. After warming comic book audiences up slowly, over the course of a decade, with slightly more straightforward stories of Iron Man and Captain America, things are about to get much, much weirder. And Feige, who recently talked to Vanity Fair’s Still Watching podcast about the studio’s ability to pluck out characters from their library of films—like Kat Dennings from the Thor franchise and Randall Park from Ant-Man and the Wasp—now has a much, much bigger pool of talent to pull from.

All the Fox mutants could easily be back on the table now, which is a huge deal for Marvel Studios—given that the company has not previously been allowed to use the word “mutant” as long as Fox owned the X-Men. Jennifer Lawrence’s Mystique? Hugh Jackman’s Wolverine? Sir Patrick Stewart’s Professor X? Michael Fassbender’s Magneto? All theoretically possible. (For the record, Stewart recently claimed that he politely declined Feige’s invitation to appear as Professor X in a Marvel production. Jackman, too, has seemed very eager to let Logan be the final word on his tenure as Wolverine.) For fans wondering how Feige would introduce the concept of mutants to a Marvel universe that has been mutant-free, the multiverse may have just provided the easiest answer.

But it’s not just the Fox stable of superheroes that’s now under Feige’s control. In a recent corporate reshuffle, Feige took control of the other Marvel TV projects meaning the cast of superheroes that populated popular Netflix shows like Daredevil and Jessica Jones are now his to play with. Charlie Cox’s Matt Murdock is rumored to appear in both the next Spider-Man and the upcoming Disney+ show She-Hulk. And of course, Feige has for years been working on a shared custody arrangement with Sony, which looks to be bearing some serious multiverse fruit if the Andrew Garfield and Tobey Maguire casting rumors for Spider-Man 3 are to be believed.

In other words, as he slowly regained control of various Marvel properties, Feige had a few options. He could have swept every Fox movie, Netflix show, and retired web-slinger into the bin and pretended like they never happened. That’s certainly been the historical approach with the ever-changing Batman franchises. But throwing the baby out with the bathwater has never been Feige’s preferred approach.

He may have recast Edward Norton’s Hulk with Mark Ruffalo in the Avengers franchise. But rather than pretending the second Marvel Studios movie he made—2008’s The Incredible Hulk—never existed, Feige tapped William Hurt to reprise his role as “Thunderbolt” Ross in Captain America: Civil War.  Another unpopular MCU movie, Thor: The Dark World, got a second chance at relevancy in Avengers: Endgame, when Thor made a time-hopping trip to see his mother. Now that movie, once a skippable installment in the franchise, is considered by fans to be a must-see.

So we can watch Feige as he carefully pulls out the things he believed worked well in the bumpy Fox, Netflix, and Sony superhero universes. Cox’s Daredevil, theoretically, will get the stamp of approval while, perhaps, Finn Jones’s unpopular Iron Fist will be left behind. There is no better example of this careful curation than Feige’s use of Peters as Quicksilver. Very little about the last few X-Men movies worked well, but the dazzling sequences featuring Peters zipping through a scene faster than any of the other mutants could blink an eye were always a bright spot. So of course Feige, who may not have loved the idea of Fox debuting their version of Quicksilver at the same time as he did, would find a way to turn that minor setback into a win for his storytelling universe.

If this all sounds confusing, I think it’s important to know that a multiverse approach to storytelling will ultimately be less confusing for superhero movie and TV fans—who, by and large, have never paid much attention to which studios owned which properties, and had no idea these corporate custody battles were raging behind the scenes. As uncomfortable as it may be to think about one corporation, Disney, being in control of so many different stories, fans can at least stop trying to track split continuities and realities. It’s (almost) all Kevin Feige’s multiverse now. We’re just living in it.

Where to Watch WandaVision:

All products featured on Vanity Fair are independently selected by our editors. However, when you buy something through our retail links, we may earn an affiliate commission.

— Stanley Tucci on His Love Story With Colin Firth
— Why We Can’t Let Media Executives Reward Trump’s Cronies
— The Hidden History of the Mary Pickford Cocktail
— Thank You, Leslie Jones, for Making the News Feel Bearable
— Cover Story: The Charming Billie Eilish
— A Complete Beginner’s Guide to WandaVision
— Gillian Anderson Breaks Down Her Career, From The X-Files to The Crown
— From the Archive: Douglas Fairbanks Jr. on the Real Mary Pickford
— Not a subscriber? Join Vanity Fair to receive full access to VF.com and the complete online archive now.