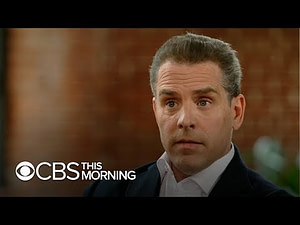 Hunter Biden, the second son of President Biden, sat down with two CBS journalists in recent days to discuss his complicated life, in which he has been traumatized by his mother and sister’s deaths in a car accident when he was 2 and propelled by overwhelming drug and alcohol addictions.

Through it all — including his most recent four-year descent into what he called “debauchery” — his father’s love for him never wavered. But he said there were times when the addiction was stronger than his family’s love. The 51-year-old tells that story in “Beautiful Things,” the memoir he’s currently promoting.

Here are seven key takeaways from the interviews that aired Sunday and Monday on “CBS Sunday Morning” and “CBS This Morning.”

The extremes of his addiction
It got bad in the four years leading up to his 2019 marriage to filmmaker Melissa Cohen. Really bad. Biden said he “spent more time on my hands and knees, picking through rugs, smoking anything that even remotely resembled crack cocaine. I probably smoked more Parmesan cheese than anyone you know.”

One time, he said, he went 13 days without sleeping, just smoking crack and drinking “insanely lethal amounts” of vodka.

And after a major family intervention, where his dad chased him down the driveway and wrapped him in a bear hug, Hunter Biden said the only thing he could think about was figuring out a way to tell Joe Biden that he was going to do something to get better, so that he could go and take another hit.

“I said I was gonna go get help,” Hunter said. “Booked the next flight to Los Angeles and decided that I was going to completely disappear forever.”

What fueled his addiction?
Biden said he always had feelings of loneliness and not fitting in.

“I am more convinced now that trauma is at the center of it,” Biden said, noting that while he and his father and brother talked about his late mother all the time, they never discussed the car accident that killed her and his sister or “the darkness” that his dad went through afterward.

“I think there’s a lot of research now that almost all addicts who suffer from addiction have serious trauma in their lives,” he said.

The affair with his brother’s widow
After Beau Biden died of brain cancer in 2015, Hunter Biden — at that point separated from his first wife, Kathleen — turned to his brother’s widow, Hallie Biden. Their affair cost Hunter clients and other business relationships.

“I think people were confused by it, and I understand that. I mean, I really do. To me it’s not something that is difficult to explain, because it came out of a real, overwhelming grief that we both shared,” he said.

“That grief turned into a hope for a love that maybe could replace what we’d lost,” Biden said. “And it didn’t work.”

Relationship with his father
Turns out the president calls his son every night, right before he goes to bed, and does the same for his grandkids, Hunter’s children.

“He’s always done that. … Because he, like me, knows what it’s like not to be able to pick up the phone and talk to his son,” Hunter said. Interviewer Tracy Smith then reminded him that the president “almost lost you.” The camera lingered on Biden as he eyes turned red and he began to tear up.

The Burisma job
Biden doesn’t think he made a mistake taking a position on the board of Ukrainian energy company Burisma while his father was overseeing policy in the region as vice president.

“I think I made a mistake in terms of underestimating the way in which it would be used against me,” he said. He also noted that if he had the chance, he wouldn’t do it again.

The Department of Justice investigation
Biden isn’t worried about the DOJ probe, which is reportedly looking into his tax affairs, and he isn’t working on a plea deal.

“I’m cooperating completely and I’m absolutely certain, 100% certain, that at the end of the investigation that I will be cleared of any wrongdoing,” he said. “I’m 100% certain of it. All I can do is cooperate and trust in the process.”

And about that stolen laptop …
Biden says he has no idea if it’s his. It could be, sure, he said, but it could also be a lot of other things. That infamous laptop allegedly contained emails detailing Hunter Biden’s business dealings in Ukraine and China and possible involvement with his family members.

But he doesn’t remember dropping it off at a Delaware computer repair shop in 2019. There might be a reason for that.

“Read the book,” he said, referencing “Beautiful Things,” “and you’ll realize that I wasn’t keeping tabs on possessions very well for about a four-year period of time.”

His memoir comes out Tuesday.