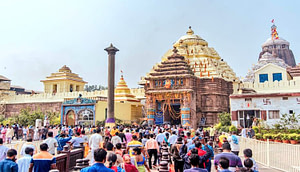 The move comes in the wake of reports that NMA plans to come up with heritage bylaws prohibiting any construction activity in the 100 metre periphery for Sri Jagannath Temple and eight other structures of immense archaeological value.

In a letter, SJTA chief Krishan Kumar wrote, “To protect the interest of the Lords, sevaks and devotees at large, I request you to immediately withdraw the draft notification under reference.”

The SJTA chief further said if National Monuments Authority (NMA) is still of the considered view that any further regulatory framework of any nature is required to protect and further the cause of ‘Mula Peetha’ of Shree Jagannath at Puri, then a detailed consultation and discussion with the members of Shree Jagannath Temple Management Committee (SJTMC) should be made before any such fresh attempt.

The draft Heritage Bylaws of Centrally Protected Monument Shri Jagannath Temple and subsidiary shrines together with adjacent area in Puri have been prepared by NMA as per Section 20(E) of Ancient Monuments and Archaeological Sites and Remains Act, 2010 and Rule 18 of National Monuments Authority (Appointment, Function and Conduct of Business) Rules, 2011.

The authority has invited suggestion or comments on the bylaws for a period of 30 days i.e. 18th February 2021.

SJTMC entered into agreement with Archaeological Survey of India (ASI) on August 22, 1979 for the conservation of the ancient built structures.

“This agreement restricts & codifies duties and responsibilities of ASI vis-à-vis Sri Mandir. The bare reading of the agreement indicates that importance of Shree Jagannath temple as one of the Dhams for Hindus all over the world was given due consideration when management committee agreed to involve ASI in certain conservation works of ancient built structures,” the SJTA letter read.

Also Read: What Is NMA Heritage Draft Bylaws For Puri Srimandir All About

“Any regulation which has the potential to restrict development of facilities and amenities on lands voluntarily contributed by devotees of the Lord will hurt their sentiments,” the letter by the temple administration noted.

In the communiqué, the SJTA has stated that large number of inhabitants (Sahis) which are more than a millennium old also exists around the temple. These habitations are of mainly sevayat families, who have been rendering service to the Lords since time immemorial.

“As the Sevayats are likely to be severely and adversely affected by any intervention of the authorities like this draft notification, they must be consulted before any process to restrict their rights is undertaken by National Monuments Authority (NMA). This is also very important as any adverse impact on Sevayats have a direct bearing on continuity of Niti-Kanti (rituals) of Lord Shree Jagannath,” wrote the SJTA chief.

Meanwhile, Puri Collector Samarth Verma said, “We are examining the bylaws at Puri-Konark Development Authority and Shree Jagannath Temple Administration level. After proper examination and taking the views of all, we can make comments on the bylaws which were framed by the National Monuments Authority.”