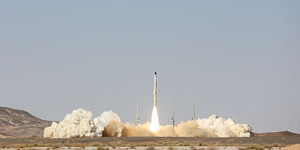 Iran tested a new rocket on Monday with improved technology that could be used in its missile program, its latest attempt to raise the stakes for the Biden administration ahead of potential negotiations over a new nuclear deal.

The new rocket, named Zuljanah, was developed under a government-backed program to send civilian satellites into orbit 310 miles above ground, according to a spokesman for the Iranian Defense Ministry’s Space Department. The technology is easily transferable to Iran’s military missile program run by the Islamic Revolutionary Guard Corps, experts say.

The Zuljanah features a solid-fuel-propelled motor that is the largest yet exhibited by Iran. Motors propelled by solid fuel, rather than liquid, are a key component in intercontinental ballistic missiles, which the U.S. seeks to prevent Iran from developing.

“After tests…[it] will be ready to put operational satellites in orbit,” said Ahmad Hosseini of the Defense Ministry, according to the IRNA state news agency.

While Iran regularly tests new missile technology, Monday’s launch, which was broadcast on national television, was the first since President

President-elect Joe Biden has said he plans for the U.S. to re-enter the Iran nuclear deal he helped establish under the Obama administration in 2015. WSJ’s Gerald F. Seib explains why doing so won’t be as simple as it sounds. Photo: Abedin Taherkenareh/EPA/Shutterstock (Originally published Nov. 13, 2020)

Iran over the past 18 months has sought relief from U.S. sanctions—reimposed by the Trump administration after it withdrew from the 2015 nuclear deal in 2018—by breaching key provisions in the accord. Tehran has stockpiled more low-enriched uranium than the deal allows, restarted uranium enrichment at 20% purity and announced that it would prepare production of uranium metal.

Mr. Biden has said he intends to rejoin the nuclear deal as a basis for follow-on discussions. Iranian Foreign Minister

in January said Iran’s missile program isn’t up for negotiation. Washington and Tehran both publicly say that the other party must come back into compliance first.

Until negotiations start, Iran is racing to build leverage and dissuade any American ambition to curtail its conventional-missile program, according to

an independent open-source intelligence analyst with expertise in missiles.

“This was a very, very clear message by the Iranians that they are advancing and that they can build longer-range stuff if they want to,” he said. “They want to show that, if you put pressure on our missiles, we can react.”

While Iran says breaches of the nuclear deal are easily reversible if the U.S. comes back into compliance and lifts economic sanctions on Iran, the knowledge acquired in the process isn’t, experts say. The same goes for advances made in Iran’s missile technology.

Iran said the rocket launched Monday was developed for civilian use. Still, the motor in the first stage of the Zuljanah measured about 5 feet in diameter and had a thrust of 75 kilotons, or 165,000 pounds, which is vastly more than is usually used for a satellite launch into orbit.

The only land-based intercontinental missile in service in the U.S., the LGM-30G Minuteman III, has a thrust of 90 kilotons, or about 200,000 pounds.

“Such a motor is incredibly useful for military application,” Mr. Hinz said about the Iranian rocket.

Solid-fuel motors enable the use of smaller missiles and more-mobile launch vehicles that are less exposed to enemy strikes and can be deployed on short notice—features that are more useful for military purposes than civilian ones, experts say.

There are, however, important distinctions between civilian satellite launchers and ballistic missiles. While ballistic missiles require sophisticated protection systems so their payloads can survive a re-entry into the atmosphere, satellites operate in space. Iran didn’t disclose certain details about the Zuljanah, such as its casing.