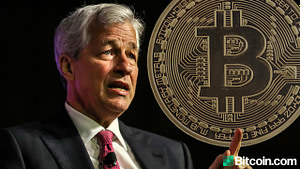 JPMorgan’s boss Jamie Dimon has a bone to pick with cryptocurrencies, shadow banking, and the financial technology (fintech) economy. In a letter to JPMorgan shareholders, Dimon explained that banks are “playing an increasingly smaller role in the financial system” and there’s a list of items like digital currencies he’s named that needs to be “dealt with – and rather quickly.”

Jamie Dimon’s Letter to JPMorgan Shareholders Says Banks Need to Focus on the Future
Jamie Dimon has written a comprehensive letter to shareholders about the company’s accomplished goals and future concerns. Dimon’s letter, of course, meets the needs of his friends in Davos and the World Economic Forum’s 2030 playbook. The JPMorgan CEO addressed many of these targets like addressing climate change and lending more money to minorities who have limited access to banking.

In addition to the accomplishments and future changes, Dimon noted that financial incumbents are “bogged down in the past” and a concentration needs to be dedicated to the future.

Dimon highlights that U.S. banks have grown much smaller in comparison to shadow banks, fintech, and the magnitude of the ‘Big Tech’ companies. The JPMorgan CEO thinks however that it is “more important” for payment transactions to flow through the U.S. banking system than these alternatives.

“Transactions made by well-controlled, well-supervised, and well-capitalized banks may be less risky to the system than those transactions that are pushed into the shadows,” the letter to shareholders insists.

Competition and Dealing With Cryptocurrencies Rather Quickly
Still, Dimon recognizes the need for competition in the financial world.

“We need competition – because it makes banking better – and we need to manage the emerging risks with level playing field regulation in a way that ensures safety and soundness across the industry,” he stressed. Despite the competition, Dimon believes there are “serious emerging issues” that need to be “dealt with” soon.

“Not only are we slow in dealing with the past, but it distracts us from dealing with the future,” the JPMorgan boss emphasized. “There are serious emerging issues that need to be dealt with – and rather quickly: the growth of shadow banking, the legal and regulatory status of cryptocurrencies, the proper and improper use of financial data, the tremendous risk that cybersecurity poses to the system, the proper and ethical use of AI, the effective regulation of payment systems, disclosures in private markets, and effective regulations around market structure and transparency.”

Dimon has been well known for disliking cryptocurrencies and bitcoin and even called the leading crypto asset a “fraud” a few years ago.

Despite this, JPMorgan has shown strong interest in bitcoin (BTC) and the digital currency economy during the last year. In February even after calling cryptocurrencies the “poorest hedge for major drawdowns in equities” it said investors can allocate 1% of their portfolios in crypto assets.

What do you think about Jamie Dimon’s opinion about bitcoin needing to be “dealt with” rather quickly? Let us know what you think about this subject in the comments section below.

Tags in this story

Disclaimer: This article is for informational purposes only. It is not a direct offer or solicitation of an offer to buy or sell, or a recommendation or endorsement of any products, services, or companies. Bitcoin.com does not provide investment, tax, legal, or accounting advice. Neither the company nor the author is responsible, directly or indirectly, for any damage or loss caused or alleged to be caused by or in connection with the use of or reliance on any content, goods or services mentioned in this article.