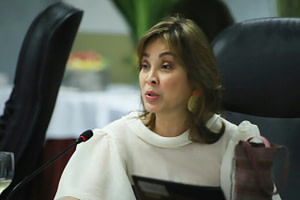 Deputy Speaker Loren Legarda has filed a bill seeking to develop and implement an ecosystem and natural accounting system that applies to the Philippine environment, giving importance to the role, value, and impact of the country’s natural resources on the economy.

Deputy Speaker and Antique Rep. Loren Legarda (Congresswoman Loren Legarda Official Facebook Page / FILE PHOTO / MANILA BULLETIN)“For decades, the debate has been whether to choose economy over conservation of natural resources. This is a false dichotomy. The economy and all of society are fully and entirely dependent on natural resources—our natural capital that includes our forests, wetlands, and other ecosystems,” Legarda, a three-term senator, said.

House Bill 9181, known as the Philippine Ecosystem and Natural Capital Accounting System (PENCAS) Law of 2021, will include what was formerly considered “externalities,” not valued as capital, in the national income accounts. Conventional national income accounting systems measure economic performance by determining the value of goods and services produced in a country and aggregating them to develop economic development indicators, such as the Gross National Product (GNP) and Gross Domestic Product (GDP).

“Consumption benefits of products and amenities provided by the natural environment, waste disposal services, and pollution are part of producing marketed commodities but are not valuated (positively or negatively) and reflected in national income accounting. While it is difficult to undertake this valuation, and many would say it would tend to commodify what is priceless, the lack of such valuation has led to the appreciation of these services as having zero instead of priceless value,” Legarda said.

Indicators and standards generated by the national income accounting system are considered vital information for economic management and policymaking. They serve as the basis for socio-economic planning, formulation of development programs, and policy analysis to aid legislation, among others. Legarda stressed that it is important that the national income accounts reflect a more accurate state of development and economic performance of the country and should incorporate both environmental and non-environmental economic inputs and outputs for policymakers to make responsive, relevant, and effective laws, plans, and programs necessary for national development.

“The bill, when passed into law, will allow government planners to have a full understanding of the natural capital available and expendable in the pursuit of national goals. For instance, there has not been an accounting of whether our legally harvested sand and gravel will suffice to meet the needs of both the Build Build Build program and the demands of the private sector. Good housekeeping requires that you budget what you have and not live beyond your means. It is the same for national patrimony. Not taking into account how much we have and how to allocate it drives our ecosystems to ruin. The climate crisis and biodiversity losses that could potentially lead to the next pandemic highlight the urgency of having this bill approved and implemented,” Legarda added.

The proposed measure adheres to the United Nations System of Environmental-Economic Accounting (SEEA), which the UN introduced in 2006 and has been continuously advancing further with the adoption of the SEEA Ecosystem Accounting in March 2001 and the UN collaborative project with other organizations on Natural Capital Accounting and Ecosystem Valuation that will end in 2021.