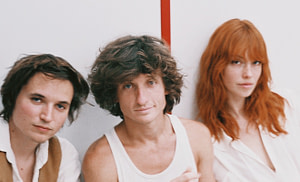 Residing in Paris, they have roots in Denmark, Finland and the UK. The constellation of nationalities gives Lewis Lazar, Christopher Willatt and Julia Johansen unique cultural reference points and passions that inspire prolific recording sessions and dynamic performances.

Lewis and Chris have known each other since childhood. Based on those early experiences and later forming bands in high school, they knew there was a good chemistry between them as writers. But it took time before new opportunities to write together came up, there was an interim period, and during that time Lewis went to New York, and Chris moved to Edinburgh.

Initially, writing songs from their flats, Oracle Sisters formed when Lewis and Chris moved to Paris in 2016. In much need of a skilled drummer, the timing of their meeting with Julia could not have been more right, and the realisation that she understood vocal harmonising was highly advantageous.

The creative decision to depict the duality of a city with vivid imagination stems from their multifaceted approach to being creative. First and foremost, it is about the bandâ€™s music, but other disciplines naturally seep into it, which means that visual art, illustration, film and cinema, literature, astrology and spirituality all come into play.

Making melodic music is right at the top of Oracle Sistersâ€™ agenda. There is a passion for vocal harmony, the songs are supported by unconventional arrangements, and concepts of limitation to one sole genre is virtually non-existent. They bring a range of musical influences to their songs including jazz, indie, folk, Brazilian music and classical, Julia loves Bossa nova, and Lewis is inspired by Bob Dylanâ€™s lyrics.

They make use of quirky, but rather immersive themes. The first track â€˜Honeymoonâ€™ is fascinating, it was written one morning. In between flats, Lewis talks about the time when Chris was staying at a friendâ€™s place, he went to meet him, so they could write. Chrisâ€™ friend had a big bathroom, which was ideal for sound and acoustics â€œWe created falsetto harmonies, itâ€™s like a harmony duet. I wrote lyrics based on an ode to the goddess of nature – mother nature. Itâ€™s a love letter to nature.â€

Finished during the confinement of being apart last year, Chris had written the basis of the idea for â€˜The Dandelionâ€™. â€œWe sat down and worked it on the piano, we developed it together,â€ explains Lewis. â€œItâ€™s quite Chet Baker, Chris is a big fan, so he has that in his style, the drawn out lines. The piano part I did was more jazzy with weird seventh and ninth chords. Itâ€™s like a gliding disco jazz song with a backbeat.â€

The band have also been working hard to finish their debut album in Greece. Along with that they became immersed in some live shows on the island of Hydra with a couple of friends – Fontaines D.C. guitarist Carlos Oâ€™Connell and James McGovern â€“ singer in The Murder Capital. The shows were in a local tavern on poetry art nights where musicians are encouraged to perform alongside.

How do Oracle Sisters progress from this point? A meeting with electronic music pioneer, ex-Daft Punk Thomas Bangalter at a party in Paris represents a moment that inspires and may give them a tool for tackling ambition. He surprised by comparing success in the music industry to a pyramid that everyone is desperately trying to reach the top of, and he pointed to alternative ways of thinking.

Bangalter suggested they increase all DIY activity and pick an alternative direction of travel to their peers. â€œBuild your own island, away from everybody else. The people who like it will come to your island. It will be more valuable if you dig deeper in your own direction.â€ Oracle Sisters are determined to reach the top of the pyramid, but they are keen to do it their way.

Join us on the ad-free creative social networkÂ Vero, as we get under the skin of global cultural happenings. FollowÂ Clash MagazineÂ as we skip merrily between clubs, concerts, interviews and photo shoots. Get backstage sneak peeks, exclusive content and access to Clash Live events and a true view into our world as the fun and games unfold.