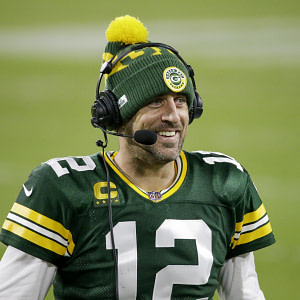 Roll out the red carpet, as the stars will align for the 2021 NFL Honors award show February 6 at the Straz Center in Tampa, Florida. Some of the most known playmakers will add to their resumes while a few new faces shine in the spotlight.

Before quarterbacks Patrick Mahomes and Tom Brady lead their respective teams into Raymond James Stadium for a much-anticipated Super Bowl LV matchup between the Kansas City Chiefs and Tampa Bay Buccaneers, we’ll recognize the players and a coach who put their best on display throughout the 2020 campaign.

We’ve predicted winners for seven awards and made a case for each selection. If you want to watch the ceremony, check out the viewing information below.

Where: Straz Center in Tampa, Florida

Green Bay Packers head coach Matt LaFleur has a case to win the award because his team went 13-3 and clinched the No. 1 seed in the NFC. Cleveland Browns skipper Kevin Stefanski deserves praise for leading his franchise to the playoffs for the first time since the 2002 campaign.

Nevertheless, the Buffalo Bills snapped the New England Patriots’ 11-year streak of winning the AFC East and claimed their first division title since 1995. On top of that, the club won two playoff matchups to reach the AFC Championship Game against the Kansas City Chiefs.

Sean McDermott led a club that went on an eight-game win streak following a Week 11 bye. Aside from the Chiefs, the Bills swept through their competition as arguably the hottest team in the league.

In the big picture, McDermott took his squad to another level after a one-and-done wild-card loss in the 2019 campaign. On his watch, the Bills changed the guard in the AFC East and now look like perennial playoff contenders.

In his 16th season, Aaron Rodgers reached career highs in completion rate (70.7) and touchdown passes (48), and both marks led the league.

Rodgers carved up defenses throughout the season, throwing four touchdown passes in seven out of 16 contests. He didn’t have a supporting cast loaded with playmakers like we’ll see with Patrick Mahomes’ and Tom Brady’s squads in Super Bowl LV.

Rodgers had one elite pass-catcher in wideout Davante Adams, who recorded 115 receptions for 1,374 yards and 18 touchdowns. No other player on the roster caught more than 52 passes. The 37-year-old signal-caller had an average receiving unit and still led the ninth-ranked aerial attack.

In doing more with a less prolific group of targets, Rodgers should claim his third league MVP honor over Mahomes, who’s vying for his second, and Buffalo Bills’ quarterback Josh Allen. Apparently, the Packers don’t need a plethora of top-notch offensive weapons with their ultra-talented signal-caller under center.

Aaron Donald is the easy choice for any casual football fan. He continues to show dominance in the trenches, logging 13.5 sacks and 14 tackles for loss this past season. ESPN’s Seth Walder shared a chart that showed the two-time Defensive Player of Year’s astounding success against double-teams in 2020.

With all of that said, T.J. Watt deserves the award. In 2020, he led the league in sacks (15), tackles for loss (23) and quarterback hits (41), which illustrates his ability to disrupt plays on every down at a slightly higher frequency than Donald. The Pittsburgh Steelers edge-rusher also recorded seven pass breakups and an interception.

Watt had a phenomenal year as the best player for the third-ranked defense in points and yards allowed. He became the Steelers’ primary game-wrecker at the line of scrimmage.

If Watt wins this award, he would officially begin the chase after his brother J.J. Watt, who’s won Defensive Player of the Year three times. The younger sibling further stepped out of the shadow of his older brother with an impressive campaign.

Justin Herbert took over the Los Angeles Chargers starting quarterback position following a bizarre sequence of events. According to ESPN’s Adam Schefter, a team doctor inadvertently punctured one of Tyrod Taylor’s lungs while giving him a pain-killing injection before the Chargers’ Week 2 matchup with the Kansas City Chiefs.

Under short notice, Herbert started in place of Taylor and made the most of his opportunity, throwing for 311 yards, a touchdown and an interception. While the veteran signal-caller recovered, the rookie continued to play well.

Herbert threw for 4,336 yards, 31 touchdowns and 10 interceptions with a 66.6 percent completion rate. All of a sudden, the Chargers seem to have a bright future with him under center.

Minnesota Vikings wideout Justin Jefferson deserves an honorable mention. He caught 88 passes for 1,400 yards and seven touchdowns, but Herbert had quarterback duels with the likes of Drew Brees and Tom Brady between Weeks 4 and 5, throwing for seven touchdowns and just one interception in those games.

Herbert has shown early signs that he’s a franchise quarterback with the arm and mobility (234 rushing yards and five touchdowns) to lead a high-powered offense.

Running back Derrick Henry isn’t a flashy playmaker because he’s not much of a pass-catcher. The All-Pro tailback recorded just 19 receptions for 114 yards this past season.

Yet Henry has a case to call himself the best pure ball-carrier in the league. He captured consecutive rushing titles and was the first person to accomplish that feat since Hall of Famer LaDainian Tomlinson between 2006 and 2007. Furthermore, the Tennessee Titans running back logged a league-high 2,141 scrimmage yards in 2020.

Chase Young made an immediate impact on a top-five defense. He logged 44 tackles, 10 for loss, 7.5 sacks, four pass breakups and returned a fumble for a touchdown.

Young had some help with Montez Sweat, Daron Payne, Jonathan Allen and Ryan Kerrigan alongside him on the defensive line, but his emergence as a leader alongside his productivity only strengthens his case.

Alex Smith’s passing numbers don’t illustrate his complete comeback story. He threw for 1,582 yards, six touchdowns and eight interceptions, but the 36-year-old settled the position for the Washington Football Team. With him under center as a starter, the club went 5-1, which included a four-game win streak.

Let’s look at the big picture. Smith suffered a significant leg injury and underwent 17 surgeries before he made it back to the gridiron. Because of Dwayne Haskins’ inconsistencies on and off the field and Kyle Allen’s season-ending ankle injury, Smith made an improbable comeback and ultimately helped Washington win the NFC East.