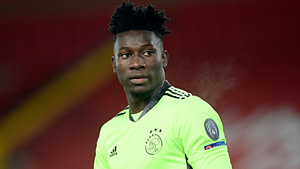 Ajax goalkeeper Andre Onana has been suspended for 12 months by UEFA after he failed a doping test last October.

The suspension is effective as of February 5, and will apply to all football activities at both national and international level.

An out-of-competition check found Furosemide in the Cameroon international’s urine, but Ajax claim Onana took it “unwittingly” after feeling unwell, with the player himself calling it “the result of human mistake”.

Ajax’s Sebastien Haller ineligible for Europa League due to admin errorEredivisie table | Eredivisie fixtures”On the morning of 30 October Onana did not feel well. He wanted to take a tablet. Unwittingly, however, he took Lasimac, a drug that his wife had previously been prescribed,” an Ajax statement said.

Ajax said they would appeal the ruling at the Court of Arbitration for Sport (CAS).

The club added: “Onana made a mistake with the product and mistakenly took his wife’s medicine, which ultimately led to UEFA’s action against the goalkeeper. The football association’s disciplinary body ruled that he did not intend to cheat. However, the European Football Association believes that, according to the prevailing anti-doping rules, an athlete has a duty at all times to ensure that no prohibited substances enter the body.”

Onana released a statement on Instagram on Friday afternoon, stating he hopes to be back playing soon after he fights to prove his innocence.

He said: “I just want to clarify that everything was the result of human mistake. I mistook a medicine containing a substance banned by WADA for a simple aspirin. The medicine prescribed to my girlfriend and I mistakenly took it for an aspirin because the packaging was almost identical, which I deeply regret.

“I have to say that I respect the UEFA Appeals Body, but I do not share their decision on this case. I consider it excessive and disproportionate as it has been acknowledged by UEFA that it was an unintentional mistake. Everyone knows that I live a very healthy life, and since I started my sporting career, I have always been strongly against the use of doping and I condemn any unsportsmanlike conduct.

“I am 24 years old and during the last few seasons I have been lucky enough to play almost every minute both for Ajax and for my national team, being named the best goalkeeper in Holland for the last four years and in Africa for the last three years. I want to say that I have no need to resort to doping to further enhance my sporting career.

“I will appeal the decision before the Court of Arbitration for Sport (CAS) to prove my innocence and clear my name. I hope to be back on the pitch soon doing what I love and help my team-mates. I would like to thank Ajax and the Cameroon national team for their support and confidence in me.”

Ajax’s managing director Edwin van der Sar said: “We explicitly renounce performance-enhancing drugs; we stand for a clean sport. This is a terrible setback, for Andre himself but certainly also for us as a club.

“Andre is a top goalkeeper who has proven his worth for Ajax for many years and is very popular with the fans. We had hoped for a conditional suspension or a much shorter one than this twelve months, because it was demonstrably not meant to strengthen his body and thus improve his performance.”

Ajax currently lead the way in the Eredivisie, holding a seven-point lead over PSV Eindhoven, while in the Europa League they face Lille in the round of 32 later this month.

The loss of Onana, unless the ban is overturned, will come as a huge blow given the goalkeeper has been an integral member of the side for five years.

After coming through the ranks at Barcelona, Onana joined Ajax in 2015, and this season he had kept nine clean sheets in 20 league games.

He also played every minute of their Champions League group-stage campaign, where they finished third behind Liverpool and Atalanta to drop down to the Europa League.

Haller unable to play EL due to Ajax admin errorAjax’s record signing Sebastien Haller will not be eligible to play in the remainder of the 2020/21 Europa League campaign due to an administrative error.

Haller joined the Dutch club on a four-and-a-half-year contract from West Ham for £20.2m in January, 18 months after the Hammers paid Eintracht Frankfurt £45m for the forward but failed to register the player in their Europa League squad on Wednesday.

Ajax were in discussions with UEFA and KNVB (Dutch FA) about the issue but now accept the club’s record signing will only be available in domestic competition.