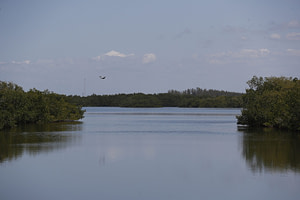 The Florida Department of Environmental Protection (FLDEP) has announced that the toxic seepage from a plastic liner into the wastewater pond at the Piney Point phosphate plant has stopped.

The FLDEP has also said that other engineers and dam safety specialists have determined that there is no second leak in the liner, despite two reports to the contrary by FLDEP and a county public safety director.

“There have been news reports of a second area of seepage from the east wall of the NGS (new gypsum stack)-South compartment at Piney Point,” FLDEP wrote in an update published at 5:11 p.m. on Twitter. “These reports are unsubstantiated.”

On Monday, a technical working group evaluated conditions on-site and confirmed the lack of a second leak, the FLDEP said. The group included engineers and dam safety specialists from FLDEP, the Florida Division of Emergency Management, the Southwest Florida Water Management District, the Army Corps of Engineers and additional third-party engineers.

Florida Department of Environmental Protection (FLDEP) has announced that the toxic seepage from the wastewater pond at the Piney Point phosphate plant has stopped. The FLDEP has also reported that there is no second leak, despite earlier reports to the contrary. In this photo is a general view of Frog Creek, located four miles from a possible wastewater breach at the former Piney Point phosphate plant on April 5, 2021 in Gillette, Florida.
Octavio Jones/Getty
While the “uncontrolled discharge” from the NGS-South compartment has been contained in the site’s protective plastic liner, the FLDEP reports, the agency is continuing “controlled discharges” from the liner to help stabilize it.

The FLDEP also said that officials from the surrounding counties and the Tampa Bay Estuary Program had tested water samples from 11 locations around nearby Port Manatee. The samples meet water quality standards, the FLDEP wrote.

Lastly, the FLDEP reported that water quality samples from Piney Point found that the water wasn’t radioactive. The agency is considering technologies to fight any possible algal blooms caused by the liner’s leakage.

On Saturday morning, Manatee County, Florida officials urged residents within a half-mile of Piney Point to evacuate immediately, fearing an “imminent” collapse of the liner into the 80-acre wastewater pond. Officials worried that if the liner collapsed, it would flood the pond with nearly 400 million gallons of polluted water into nearby waterways.

By Saturday, the pond had already discharged at least 25 million gallons of polluted water into Port Manatee, according to the Tampa Bay Times. Environmentalists worry that the discharge, which contains phosphorus and nitrogen, will damage the bay’s ecosystem.

On Monday, Jacob Saur, the county’s public safety director, said that an infrared drone had detected a second breach in the Piney Pond liner. He said that the suspected breach would be investigated later in the day.

In a statement released Saturday, an environmental group named Manasota-88 said that Piney Point structural conditions were known for a significant period before the recent emergency. The group said that officials had “mismanaged” the site for decades.

“The current crisis can be traced back to the absurd 2006 decision to allow dredged material from Port Manatee to be placed into one of the gyp stacks at Piney Point, something the stack was never designed for and should have never been allowed,” the statement read.