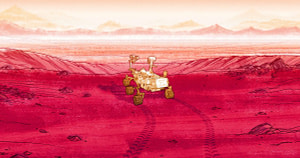 With missions from three nations expected to reach the Red Planet this month, 2021 might be the most illuminating year in the history of Mars research.

Earthlings have been sending probes and robots to and near Mars since the 1960s, and dozens have successfully captured images and data about the planet, gradually revealing its desert mysteries. We’ve learned a bit about its geology and atmosphere, found ice, and uncovered compelling evidence that Mars was once home to blue oceans.

Now, we’re looking deeper. The looming missions will search for evidence of past life on Mars, gather a complete picture of the planet’s weather systems, prepare soil samples to be picked up by a future mission, and even attempt the first flight on Mars (via a small helicopter).

From the United States comes Perseverance, NASA’s fifth Mars rover. In the country’s first independent mission to Mars, China is sending Tianwen-1. And the Hope orbiter from the United Arab Emirates will be the first interplanetary mission from any Arab nation.

All three of these missions launched from Earth in July 2020. Hopefully, by the end of 2021, they’ll teach us plenty of new things about Mars.

The Perseverance mission
NASA’s Perseverance is expected to land in Jezero Crater, just north of the Martian equator.

“We’re going to a really old area of Mars and we expect that because the climate was warmer and wetter around 3.5 million years ago, which is the age of these rocks that we’re looking at, if life had a chance to arrive, this might be a good place to search for that evidence,” said Mitch Schulte, Mars 2020 program scientist at NASA.

Once the rover lands, it will check to make sure its parts and scientific instruments are working, which can take a month or two. But once it’s ready, the search for past life can begin.

Perseverance is equipped with cameras, lasers, and other instruments to help it examine Mars and scan for traces of atoms left behind by tiny lifeforms.

Schulte was in charge of the process that determined what instruments would be included on the rover. That process wrapped up back in 2014, two years after the team started to develop this mission.

“Instruments on the rover’s arm will be able to detect the presence of organic matter but we’re not expecting, like, dinosaur bones or anything like that,” Schulte said. “We’re really looking at fine detail in the environment that the organisms might have inhabited.”

Those instruments on the rover’s arm are called and . SHERLOC can hit surfaces two inches away with an ultraviolet laser to detect organic chemicals, and is partnered with a camera named WATSON.

PIXL uses an X-ray beam to search for organic material, traces of which can last millions of years after a microscopic organism lived.

Before its hunt begins, the rover will attempt to launch the first flight on Mars. Aboard Perseverance is Ingenuity, a roughly 4-pound drone equipped with a camera. It can fly for around 90 seconds, covering almost 1,000 feet at heights of 10 to 15 feet on pre-set paths. It’s solar-powered and can recharge its own battery.

“This will be the first time flying anything on another planet. That’s pretty spectacular,” said Michael Meyer, Mars Exploration Program lead scientist at NASA. As lead scientist, Meyer works with the global community of Mars scientists to determine what the next steps of Mars exploration should be and how missions should proceed in the future.