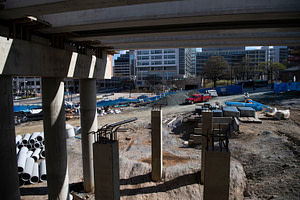 The Senate’s top referee on procedural matters ruled Monday that a revised budget resolution could potentially be used to pass another reconciliation bill, according to Senate Democratic officials.

That could give Democratic leaders at least one more opportunity to pass legislation that could skirt a Senate filibuster, with Republicans already signaling that President Joe Biden’s infrastructure and other proposals won’t get the 60 votes needed to advance in that chamber.

Goodman added that “some parameters still need to be worked out,” a reference to unanswered questions about any potential limitations that a second reconciliation process might face.

Senate leaders had been anxiously awaiting the pivotal decision since last week. Democrats had already been prepping to use the fiscal 2022 budget reconciliation process to try to pass pieces of their agenda that face GOP opposition. But the use of Section 304 of the 1974 budget law to try to pass another reconciliation bill through a revision of a previously adopted budget has never before been attempted.

Lawmakers can also use reconciliation to raise the statutory debt limit, which will become necessary later this year.

The novel use of Section 304 would require Democrats to adopt an amended fiscal 2021 budget resolution, which would mean another exhausting “vote-a-rama” on the Senate floor.

But it could allow them to potentially employ the Biden administration’s strategy of breaking up their infrastructure plans into two — one focused on the plan Biden rolled out last week, and a second focused on education, health care and child care. The second package could theoretically travel via the fiscal 2022 reconciliation process, if the parliamentarian’s decision allows for that.

But MacDonough’s opinion was cursory and left some questions unanswered.

Schumer and other Democrats had argued to use the provision to pass additional reconciliation measures under a revised fiscal 2021 budget blueprint, for instance, rather than having to wait and use the procedure twice during the fiscal 2022 cycle. Monday’s ruling doesn’t specify whether use of an amended fiscal 2021 budget would be allowed for that purpose, a GOP aide pointed out.

Some budget experts also wonder whether the revised budget resolution can only be used to raise the debt limit, since the previous pandemic-focused reconciliation bill included spending and tax components. The GOP aide noted the parliamentarian’s opinion doesn’t say anything about whether it’s OK to use Section 304 to pass an infrastructure package, for instance.

Goodman said in the statement that “while no decisions have been made on a legislative path forward” or whether to use a second revised budget resolution, MacDonough’s ruling “is an important step forward that this key pathway is available to Democrats if needed.”

Biden’s proposals would be financed in part by tax increases, including several provisions rolling back tax cuts enacted in 2017 under GOP control of the White House and Congress — also done through reconciliation.

On Monday, Senate Minority Leader Mitch McConnell said at an event in his home state of Kentucky that the infrastructure plans were likely a nonstarter on his side of the aisle.

“At the heart of the bill being described as an infrastructure bill is a complete reversal of the tax reductions that we made in 2017, not just for businesses but for individuals as well, which jumpstarted our economy,” McConnell said. “So I can’t imagine myself, if that’s the package — a bunch of more borrowed money plus undoing the tax relief that drove our economy to a 50-year high — I can’t imagine that’s going to be very appealing to many Republicans.”

Lindsey McPherson contributed to this report.