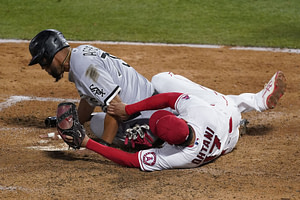 Jared Walsh hit a game-ending, three-run home run off Sox reliever Matt Foster with one out in the ninth inning, giving the Angels a 7-4 victory at Angel Stadium in Anaheim.

The Sox lost three of four in the tightly-contested series.

And they suffered another blow to their offense when star shortstop Tim Anderson left the game in the first inning with tightness in his left hamstring.

Anderson appeared to be in pain after running to first while grounding out to second baseman David Fletcher to begin the game.

“We got him out early, did a lot to try to stretch him,” Sox manager Tony La Russa said. “He was feeling a little better but, discretion right there is the better part of valor.”

The Sox said Anderson is day to day.

Leury Garcia replaced Anderson and went 1-for-3 with a run and a sacrifice bunt.

“This was a difficult game,” Garcia said through an interpreter. “But we battled to the end. We were able to tie the game in the ninth and battle. Unfortunately we didn’t get the win, but today’s game shows a lot of who we are. We are playing as a team, united. That’s who we are and who we are going to be throughout this whole season.”

In addition to being on the mound, Ohtani batted second in the Angels lineup and hit a 451-foot solo homer in the first inning.

Ohtani had a 3-0 lead in the fifth, but the Sox loaded the bases with two outs for Yoan Moncada. Ohtani threw a wild pitch that scored Garcia and moved the other two runners up a base.

Ohtani got Moncada to swing and miss for the third strike, but the ball got away from catcher Max Stassi. He retrieved the ball but threw wide to first and two runs scored to tie the game.

Jose Abreu was the second runner. He got tangled up with Ohtani, who took a tough fall, while sliding safely at the plate.

Ohtani exited after the play. He went 1-for-3 at the plate and allowed one earned run on two hits in 4⅔ innings with seven strikeouts and five walks.

“Really, I wanted to get through five,” Cease said. “I just tried to pound the zone. If I’m a little sharper, we probably get through it. At the end of the day, I kept us in there. So I’m decently happy with that.”

Cease left with the game tied at 3. It didn’t remain that way for long, as Walsh greeted reliever Codi Heuer with a solo home run to put the Angels back ahead.

The Sox evened the score again in the ninth. Madrigal got hit by a pitch and advanced to second on a bunt by Garcia.

Adam Eaton then bounced one back to the mound. Raisel Iglesias tried to get Madrigal at third but threw the ball away. Madrigal scored to tie the game at 4.

Sox closer Liam Hendriks warmed up in the bullpen at one point in the inning, but La Russa didn’t want to use him in a tied game on the road. At home, La Russa said, it could have been a different case.

The Sox elected to stick with Jose Ruiz, who surrendered a lead-off single to Dexter Fowler.

Foster replaced Ruiz and struck out Mike Trout. But Anthony Rendon walked and Walsh ended the game with his 395-foot home run.

The Sox will look to regroup Monday, when they start a three-game series in Seattle.

Garcia is the likely option at short if Anderson has to miss time.

The Sox are already without another big offensive star in left fielder Eloy Jimenez, who is out five to six months with a ruptured left pectoral tendon.