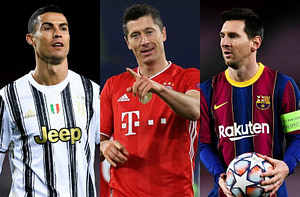 As the 2020/21 season enters the final third, it is time to check out the 10 current leaders in the European Golden Shoe race.

The 2020/21 European Golden Shoe race is beginning to take shape as clubs reach the halfway stage.

Last season’s runner-up Robert Lewandowski has already taken a commanding lead at the top of the table, irrespective of a league’s co-efficiency rating, with a stunning 35 goals in his 25 Bundesliga games.

The European Sports Media determines the outcome based on a player’s goal numbers and the strength of his league (e.g. goals scored * league strength=total points).

The Tottenham striker scored his 19th Premier League goal in Sunday’s 2-2 draw with Newcastle. Kane has been brilliant recently, having scored five goals in his last six outings to break into the top 10 of the European Golden Shoe rankings.

The former Barcelona striker has taken no time at all to adapt to his new surroundings, having scored 19 goals already. His recent strike against Valencia also saw him break a Cristiano Ronaldo La Liga milestone.

Suarez is one of the most in-form stars in Europe and is competing with Messi in the Golden Boot race in Spain.

The Villarreal striker has proved last season was no fluke by enjoying another prolific campaign this term.

Moreno’s hat-trick in Villarreal’s 3-0 win over Granada last weekend has moved him level with Luis Suarez on 19 points. And as the Spanish league’s top-scorer Lionel Messi is only four goals ahead, is it too soon to write this guy off?

Lukaku’s goal drought is over. The former Manchester United striker has scored five goals in his last six Serie A outings for Inter Milan, and he’s even been chipping in assists.

He is now Cristiano Ronaldo’s closest rival for the Golden Boot award in Italy.

Mbappe has had another impressive campaign in Ligue 1. His prolific form has helped Paris Saint-Germain stay within three points of league leaders Lille ahead of the final seven games.

The 22-year-old could still be within a chance of a top-three spot in the European Golden Shoe race.

The 20-year-old has kicked off his first full campaign in the German Bundesliga with a brilliant 21 goals already. Had a muscle injury not sidelined him for Borussia Dortmund’s last four league games of 2020, he could’ve been a lot closer to the top.

Nevertheless, Haaland has recovered from a torn muscle fiber and is firing in goals once again.

The former AC Milan striker completed a permanent €3m transfer to Eintracht Frankfurt in September and has repaid the club’s faith by enjoying an impressive second season in the Bundesliga.

Only Robert Lewandowski has scored more goals than Silva in the German top-flight.

The six-time Ballon d’Or winner’s resurgence continues, having scored in 10 of his last 11 La Liga games. Messi has supplied 16 goals and six assists in this period to help Barcelona bag 10 wins and revive hopes of a possible title challenge.

After narrowly missing out on a first Capocannoniere award and a fifth European Golden Shoe, Ronaldo has entered his third campaign with Juventus more determined than ever.

The Real Madrid legend continues to bag the goals in for a struggling Juventus and recently scored a late equalizer to spare the club defeat in the Turin derby.

The 2020 FIFA Best Player of the Year has made the difference yet again for Bayern Munich. His goal contributions have made up 52% of the club’s goals.

Lewandowski is determined to win a first European Golden Shoe after narrowly missing out to Ciro Immobile last season.