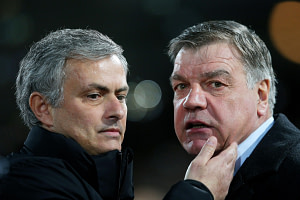 Spurs boss Jose Mourinho has come under intense scrutiny after the dismal 1-0 defeat to Chelsea, suffering consecutive home league losses for the first time in his managerial career.

The Spurs boss is under real pressure With Tottenham currently ninth and seriously off the pace in the race for top four, anything but victory on Sunday could have serious implications for Mourinho.

The Baggies, meanwhile, aren’t in the best form themselves as they slip further into relegation trouble.

Allardyce has a huge task keeping West Brom up this season Tottenham vs West Brom: How to listen
The match will get under way at the Tottenham Hotspur Stadium at 12pm on Sunday, February 7.

You can listen to the action live on talkSPORT and our coverage gets under way at 11am.

Mark Saggers will be your host, with commentary from Joe Shennan and Dean Ashton.

To tune in, click the radio player below or HERE for the live stream.

Here are the other ways to listen…

Radio – talkSPORT is available across the United Kingdom via DAB digital radio and on 1089 or 1053 AM.

Davinson Sanchez also returns to replace Eric Dier after his error against Chelsea, while Moussa Sissoko and Steven Bergwijn are dropped in favour of Lucas Moura and Erik Lamela.

Ainsley Maitland-Niles, a deadline-day West Brom loan signing from Arsenal, starts for the Baggies on Sunday as the England international makes a swift return to north London.

“So since 2012 without three defeats in a row? But since when without a title? Maybe I can give one.”

West Brom manager Allardyce: “I know the fight Jose will put in the side to overcome those three defeats, it doesn’t make it easy for us.

“They played Chelsea who have spent over £200million on the team, they would expect it would be a tough game.

“Our only look at the facts is that they don’t have Harry Kane, who is a big loss for them.

“I think they’ll change the system and the team because of their (fixture) load, so we can’t predict what the team might be.”

Tottenham were toothless in their defeat to Chelsea Tottenham vs West Brom: Match stats and facts
Tottenham are looking to record their first league double over West Bromwich Albion since the 2011/12 season under manager Harry Redknapp.
West Brom have won just one of their last 14 away games against Spurs in all competitions (D6 L7), a 1-0 win in September 2014 at White Hart Lane.
Tottenham have lost just one of their last 26 Premier League home games against promoted clubs (W23 D2), going down 1-3 against Wolves in December 2018.
Since a 1-0 win at Crystal Palace in August 2016, West Brom are winless in their last 11 Premier League games in London (D2 L9). The Baggies have lost each of their last five top-flight games in the capital, conceding at least twice each time.
In the past five seasons (including 2020-21), Tottenham have lost just two of their 28 Premier League games against sides starting the day in the relegation zone (W20 D6), with those defeats coming against West Brom (May 2018) and Newcastle (August 2019).
West Brom have conceded 26 Premier League goals in nine matches under Sam Allardyce, as many as they did in 13 games under Slaven Bilic. The record for most goals conceded in a manager’s first 10 Premier League games at a club is 28, jointly held by Danny Wilson at Barnsley (1997), Nigel Adkins at Southampton (2012) and Slavisa Jokanovic at Fulham (2018).
This is Spurs boss José Mourinho’s first home Premier League meeting with West Brom since April 2018 with Man Utd, losing 1-0 against the Baggies, who were bottom of the table and would go on to be relegated.
West Brom manager Sam Allardyce has faced José Mourinho more often without winning than any other manager in the top-flight (P12 D3 L9), while Mourinho has only faced David Moyes (13) more times without losing than his 12 games against Allardyce in the Premier League.