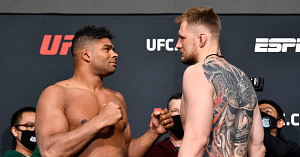 Join us today on Bloody Elbow for live results, discussion, round scoring, and full play-by-play (main card) as UFC Vegas 18: Overeem vs. Volkov goes down in Vegas.

The headliner of the card comes in the heavyweight division, with veteran Alistair Overeem taking on Alexander Volkov. The co-main will see Frankie Edgar look to beef up his bantamweight resume when he meets Cory Sandhagen. Askar Askar vs. Cody Stamann was a late scratch from the main card.

This is an ESPN+ show and is kicking off slightly earlier than usual. The seven-fight preliminary card is scheduled to start at 5pm ET/2pm PT on ESPN+. The six (or five)-fight main card will kick off at 8pm ET/5pm PT on the same streaming network.

Round 2 – Hard jab from Volkov. Head kick from Overeem is blocked. Three more jabs and a right from Volkov. Overeem tries to clinch. Oblique kick from Overeem. Overeem wades in with a right. Volkov wobbles Overeem with a combo! Big right over the top and Overeem retreats! Volkov resets. Overeem is bleeding badly and looks for a takeown. Volkov defends. Volkov drops Overeem again with another combo! He’s not getting up that time and the ref pushes Volkov away. It’s over.

Alexander Volkov defeated Alistair Overeem via TKO (strikes), 2:06 of round 2

Round 1 – Edgar takes the center right away. Nice left from Sandhagen, and a low kick. Edgar with a combo. A JUMP KNEE FROM SANDHAGEN KNOCKS EDGAR CLEAN OUT! FACE DOWN! HOLY HELL!

Round 2 – Counter combo from Johnson. Hard right from Johnson. Guida shoots and puts Johnson onto his butt against the cage. Johnson gets up to one knee, then his feet. Guida keeps a hold of Johnson’s legs. Johnson lands a couple of hammerfists. Another and Johnson gets away. He immediately lands a knee to the chin. Guida jumps in on a takedown attempt against the cage again. Foot stomps from Guida. Johnson separates, then sluffs off another takedown attempt. He reverses and almost gets a takedown of his own. Knees to the body from Guida. Back to the center with a minute to go in the round. Two low kicks from Guida. Guida shoots again. They stall out. 10-9 Guida.

Round 3 – Guida takes the center immediately. They both throw big shots. And miss. Jab from Johnson. Johnson lands a hard shot, but Guida shoots in immediately and gets Johnson to his knees. Johnson is back up and looks for underhooks. Guida holds on. They’re not doing anything. The ref warns them. Guida gets onto Johnson’s back and sinks one hook. He looks for the choke, and he looks to have it secured! Johnson is hand fighting to survive. Body triangle from Guida. Guida gives it up but tries to reapply it. Johnson trying to roll away, but the body triangle is tight. 10-8 ad 30-26 Guida.

Round 1 – Front kick from Ferreira. Long right from Dariush. Head kick from Ferrerira. Couple of lefts from Dariush. He shoots in but Ferreira stays up. Ferreira jumps for an armbar! Dariush deftly defends and Ferreira gets up. Dariush looks to put him back down again. He can’t. They start chucking knouckles. Big shots from both men! A step-in knee from Dariush hurts Ferreira! He goes to his back and Dariush opens up with strikes. Ferreira threatens with a submission, then closes his guard. Ferreira tries to roll for a leg. Dariush spins and defends, falling into Ferreira’s guard. More big punches from Dariush. Ferreira gradually gets up with 30 seconds to go. Nice combo from Ferreira, and a body kick. Dariush with a right hook! Front kick to the face from Ferreira! Great round. 10-9 Dariush.

Round 2 – They get right after it again. Trading head kicks. Another front kick from Ferreira. Low kick from Dariush. Right hook from Ferreira. Ferreira stuffs a double leg. Dariush stays on it though and trips Ferreira to the mat. They stall out. Dariush backs out and eats an upkick. Dariush defends an omoplata attempt. Ferreira gets to his feet, then rolls for a leg lock Dariush defends and takes Ferreira’s back with one hook. He’s up high, and breaks. Ferreira throws a lazy right hook and is double-legged to the mat. Up quick though. Ferreira with a spinning back fist but it’s blocked. Dariush cuts a corner and gets another takedown. Beautiful. Bg overhand right from Dariush as he backs out of the guard. Ferreira tries to squirm away but can’t. 10-9 Dariush.

Round 3 – They start trading right away again. Hard left from Ferreira. Dariush with a low kick. Dariush with a left. Dariush looks for a single leg but gets popped with a shot. He dives in on Ferreira’s legs. SStill can’t get him down. Cup kick from Dariush. Cornuts cam confirms. Ferreira takes about a minute and they get back to it. They trade body kicks. Dariush slips on at takedown attempt. Ferreira lands. Big left from Dariush! Ferreira stops a takedown and literally runs right into the referee. Two big shots from Ferreira. Counter left from Dariush connects. Dariush slips and goes to his back. He lands a quick upkick and gets up after a leg lock attempt. Step-in knee to the body from Dariush. Left from Ferreira. Dariush shoots, then ragdolls Ferreira back the other way and gets him down. He rolls onto Ferreira’s back. He looks for a leg lock. Ferriera on his feet and lands a shot. 10-9 and 10-9 Ferreira but 29-28 Dariush.

Round 1 – Marques scoops a single right away. He manafes to get Rodriguez to his back. He uses the fence to get back up, but ate a few punches. Marques looks for another trip takedown. He eventually gets Rodriguez to a seated position. Now he has him flat on his back. Back to seated. Flat on his back again. Marques tries to pass but can’t. Rodriguez gets up again. And right back down with a body lock. Few punches from Marques. Rodriguez finally gets up and spins away. 10-9 Marques.

Round 2 – They trade low kicks. Rodriguez blocks a takedown attempt and lands a shot. Marques tries again and gets him down this time. He’s just riding him, not really landing much. Back up, back down. He’s on his back now. He secures a body triangle and looks for a choke. It looks like he’s got it, but the round is almost over. Rodriguez is out! Nice win!

Devonte Smith def. Justin Jaynes by TKO (doctor stoppage) at 2:38 of round 2

Ode Osbourne def Jerome Rivera by TKO (punches) at :26 of round 1