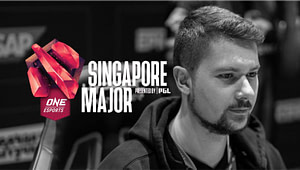 Invictus Gaming emerged victorious at ONE Esports Singapore Major 2021 after a long-fought battle versus Evil Geniuses. Falling just short was PSG.LGD, the other Chinese contestant that fought their way from the Wild Cards.

Notice a trend here? There was no European team at sight among the top three teams at the Singapore Major. And no, we ruled out homesickness and jet lag out of the list of reasons they flopped.

Team Secret finished fourth
Team Secret’s participation at the Singapore Major was supposedly depicted as a raid boss for the other teams. Yet, for a team “crowned” 2020 champions, Team Secret got swept under the rug after losing both series versus PSG.LGD and Invictus Gaming.

It seems like their opponents easily identified a flaw in Secret’s arsenal. All the boasting about their wunderkind, Lasse Aukusti “MATUMBAMAN” Urpalainen, as a reliable hard carry that never fails to deliver, bounced back right at them.

That fame and glory really painted Matumbaman as a target for opponents to shut down. Invictus Gaming always prioritized getting rid of Matumbaman more than anything, which was a recipe for success. With Matumbaman out of the picture, it was easy pickings of the other Team Secret players.

The EU boosted  pack
Team Secret may not have secured the major champions title as they hoped for, but they were still doing much better than their European brethren. More than anything, fans were disappointed by how terrible the EU powerhouses performed. Except for Nigma, which gets a “pass”, having to play with a handicap after Ivan Borislavov “MinD_ContRoL” Ivanov got ill right before the event kicked off.

For Alliance and Team Liquid, there was no excuse for being eliminated so early into the tournament. Alliance garnered quite the attention after securing second place at DreamLeague Season 14 DPC EU Upper Division. Even Team Liquid had high expectations riding on them after clutching the tiebreakers.

As much as we had like to say that these EU powerhouses dropped their balls for underestimating their opponents. It was really more about the Asian teams outperforming the powerhouses every step of the way. Take OB Esports x Neon, the team responsible for snatching fifth place and almost taking out Team Secret. Despite having a stand-in, they delivered a decent showing over their EU counterparts with their full line-up ready.

Virtus.pro’s questionable letdown
The other team that really took us by surprise was Thunder Predator, who dealt the finishing blow on Virtus.pro.

VP was on everyone’s Dota 2 betting slip to win it all at the Singapore Major, perhaps even giving Team Secret a run for their money in the grand finals. But they were out cold before they even make it into the quarterfinals. Getting knocked out by a Wild Card team in the upper bracket was not a good look either.

PSG.LGD played their cards right against VP, being on the aggressive side with Wang “Ame” Chunyu and Cheng “NothingToSay” Jin Xiang, the iconic duo in team fights. Additionally, important to note that PSG.LGD played around Phoenix’s Supernova as the stun can be lethal to elusive mid heroes. They used similar approaches to teamfight winning mechanics throughout their entire run.

From drafts down to their very playstyle, there’s variety in how these teams play in a LAN tournament. Clearly, the European and CIS teams have been missing out on the action as they fail to outsmart their rivals. With only one remaining major left for the DPC season, they should opt to step up their game at the next major. Till then, Invictus Gaming and even several of the SEA underdogs can call themselves “winners” at the Singapore Major.

Thank you too! We look forward to seeing you again. All the best in DPC season 2 💪

What does this mean going forward
The entire scene is now returning to play another round of domestic DPC Leagues. For EU and CIS and NA teams this needs to be a time where play styles are adjusted. Too many teams fall victim to “death squads” rolling over individual players, without a single trade happening anywhere on the map. A shift in mentality on how matches are approached is needed for most western teams.

Thunder Predator and the SEA teams (Fnatic, Neon) have a solid grasp on how to tackle matches and only need to hope for a good individual performance from players. As for China, the entire region has shown dominance at this event. The path forward is not becoming complacent in their play as regions return in next major seeking revenge.

Finally, for esports betting as a whole, the Singapore major was a great Dota 2 odds equalizer. You can expect a lot closer odds in most international matches, now when we have a clearer picture of how the power rankings are sitting globally.