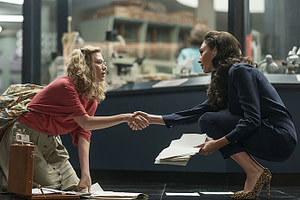 A long-time fan of the site, Adam J. Yeend is an actor, producer, and former Title Manager at 20th Century Fox Home Entertainment.

Yeend found himself going against the consensus on one particular film – Warner Bros. Pictures’ “Wonder Woman 1984” – and his positive reaction online drew much attention, especially when one of the film’s starts retweeted it.

Here, in his first piece for Dark Horizons and shortly after another comic-inspired work dealing with grief hit the streaming world, he elaborates on his reaction and asks you to consider the film in a different light:

For many, the 2020 holiday moviegoing season was met with a bitter taste after the year that proceeded it. Following several cancelled release dates, I was looking forward to sitting down to watch “Wonder Woman 1984” on Christmas Day. It was a movie shot on film and with IMAX cameras, so ideally, I would like to have seen it on the big screen, but, you know, 2020 – a year of continual compromise in navigating the day-to-day, so the living room it was.

I had enjoyed Patty Jenkins’ first “Wonder Woman” in 2017 – it felt grounded, important, it was highly entertaining and pushed a message of compassion and love winning above all. However, watching “Wonder Woman 1984,” it reminded me of the first time I saw Tim Burton’s 1992 sequel “Batman Returns”. There was a movie that, coming off a hugely successful first film, the studio allowed the filmmaker to have full creative control. The result was an uncompromised take on a known IP and a film that initially caused a lot of head-scratching. It also faced the wrath of McDonalds and a backlash from parents unhappy with the film’s grim subject matter.

However, “Wonder Woman 1984” was less lucky than “Batman Returns”. It faced the acrimony of social media led by an exhausted, pandemic-fatigued audience unwilling to consider a central message of hope, and the cost and ripple effect we can all have in our community. “Wonder Woman 1984” was not a film about granting wishes, but a story where our heroes and villains are tempted by megalomania, narcissism, and the need for external validation – three qualities that are not only accepted but celebrated in 2020 – Instagram and other forms of social media are built on the very concept.

Before the film’s release, one YouTube critic gave the film a positive review, but warned: “I hope audiences are prepared to pivot.” They were not. Understandable considering we have all had to pivot enough in 2020. I am, however, among the seemingly few who loved this movie and the message it stood for. After watching it, feeling elated and moved by the film; I took to social media to see what others were writing, and a decent portion of the response, to me, felt like audiences were missing the point entirely.

And since we all have an opinion these days – and by God, we’re going to put it out there – I Tweeted my piece and got on with my holiday. Hours later I started receiving messages from friends in Australia asking if I was OK and to not “let a bunch of strangers bring me down” that I opened Twitter to find several hundred notifications. Actor Pedro Pascal, who plays the villain Maxwell Lord in the film, had ‘liked’ and commented on my tweet with, “This Is Amazing.”

I have read a lot of the replies, many standing in firm agreement with what I wrote, a few nasty low-level insults, and many others raising valid critiques of the film I had not considered, for which I am grateful. Many just did not like the tonal shift or creative choices which is completely valid. The story might not be as coherent as we would like, and without spoiling too much, I believe it’s fair to take issue with the method by which Chris Pine’s character comes back into the fold – but to me, that was also part of the film’s message of cost and ripple effect of how what we want can and does affect other people.

Just to reiterate, it’s perfectly valid simply not to like the movie. After all, film is a subjective art. It seems, however, what most took issue with was what I consider to be the film’s greatest strengths: director Patty Jenkins’ bravery, or should I say audacity, to bring us a film in 2020 with themes and ideals reminiscent of the pre-J.J. Abrams-era Star Trek – themes that even “Star Trek” itself has abandoned in its recent incarnations.

It’s true, in WW84, there’s not much by way of superpowers saving the day, there’s also less action, but there’s plenty of humanity. On January 4th, The Guardian called the film “smug and dishonest” and critiqued the shallow motives of Kristen Wiig’s character Barbara, suggesting that “for women, male attention is the only metric that matters.” The article concludes by labeling the film as “gaslighting.”

This could not be further from the truth. The Guardian’s dismissal is, however, more of a reflection of a “fake news” era we live in today: when presented with ideas, information, or suggestions to which we find uncomfortable, critical thinking is simply pushed aside in favor of a label meant to discredit and disregard. Wiig’s character is not punished for her wanting to be more like Gal Gadot as the article suggested – there’s no shortage of men and women wanting to be like other people or to seek out approval to fill in their insecurities – but she is punished by one of the questions the film raises which is ‘is what you want worth it and what does it cost?’. Are we as individuals, and as a collective, comfortable with taking what we want regardless of what it costs? And what are we willing to give up in order to get it? Barbara, so wounded by years of rejection doesn’t care. Diana and a homeless man are the only two characters in the film who accept and value Barbara as she is. No one else does – including the audience.

The film also presents us with a superhero who not only is losing her powers but is also in a state of grief. There’s nothing fun, or even entertaining, about grief, but we all go through it – and witnessing our heroes in this manner is often uncomfortable. It reminds me of the first time I saw my dad cry. While the story hinges on wishes and what they cost, its overall message is far from gaslighting. That even through loss, we can emerge from our emotional pain, not with brute force, but with enlightenment, wisdom, and a better understanding of ourselves and each other – again the Gene Roddenberry “Star Trek” view of humanity.

Diana’s wish to be reunited with her love may not be your average superhero fare, but it does bring audiences closer to her character. Simply put, we’re all human. We all rise and fall. We all have pain, and in the end, magical superpowers aren’t what get us through. The answers are within us all – how we cope with loss, a pandemic, or anything else. Unlike Wiig’s character Barbara, Wonder Woman is willing to consider the cost of what she wants, and her heroism comes into play when she gives it up. The alternative is cynicism – much like what I experienced on social media, reading The Guardian’s article, and watching the reviews for this film on YouTube.

As with Todd Phillips similarly divisive “Joker”, there were those who championed Jenkins’ willingness to take risks. I worked for many years coordinating test screenings in Los Angeles where I handed out and collected countless audience scorecards. I’ve witnessed battles between filmmakers and studio executives and know that getting a film made is a monumental challenge and should demand more reflexive thinking. Things are even more lopsided for minority filmmakers – it’s difficult enough to make a big-budget film with big ideas, without the added pressure of having it resonate with audiences on a wide scale. Take a look at the fate of 2013’s “Cloud Atlas”, another film demanding audiences to look inward.

For me, 2020 forced me to step back and re-evaluate my life. It also challenged me with not one but two career shifts; surgery; the US election, being cut off from my home country and family; and suffering the loss of our beloved wolf-dog who was more like our son than a pet. That said, I consider myself one of the lucky ones. Life is not easy. Having hope and an open heart leaves us vulnerable, losing loved ones or our livelihood is debilitating, feeling like we have no control is unsettling, and looking in the mirror is often terrifying. But it’s what we’ve signed up for.

A superhero, president or God-like figure will not save our planet from itself – the solution is within us, and that’s a daunting notion to digest. When famed film critics Gene Siskel and Roger Ebert reviewed Francis Ford Coppola’s “Bram Stoker’s Dracula” back in 1992, they agreed on the film’s lack of a coherent story and Siskel gave the film a “thumbs down,” while Ebert “thumbs up”. Obviously perplexed by Ebert’s “thumbs up” rating Siskel questioned Ebert’s reasoning; without missing a beat, Ebert replied, “Because I liked the way it looked.”