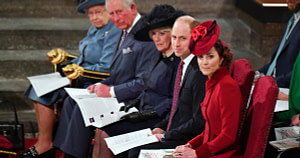 Buckingham Palace on Tuesday issued its first statement since Prince Harry and Meghan’s shocking interview with Oprah Winfrey. In it, Queen Elizabeth says, “The whole family is saddened to learn the full extent of how challenging the last few years have been for Harry and Meghan.”

“The issues raised, particularly that of race, are concerning,” the statement continued. “Whilst some recollections may vary, they are taken very seriously and will be addressed by the family privately. Harry, Meghan  and Archie will always be much loved family members.”

While the interview aired in the U.S. on Sunday, it was not broadcast until Monday night in Britain. On Monday, the official Instagram account used by Prince Charles and his wife, Camilla, showed him visiting a National Health Service vaccine site in Britain and pointed out his work with a Black church organization to encourage vaccinations.

Among the bombshell revelations in the interview, Meghan said that there had been “several conversations” among the royal family about “how dark” their baby’s skin would be. Oprah confirmed to “CBS This Morning” that Harry said those conversations did not involve Queen Elizabeth or her husband, Prince Philip.

Meghan and Harry also revealed what appeared to be other rifts within the family. Meghan decried an effort to change royal protocols that automatically gave the grandchildren of the monarch a title, starting with their son, Archie. While their son is the great-grandchild of the queen, he is the grandson of the next king, Charles.

“Even with that convention I’m talking about — while I was pregnant, they said they wanted to change the convention for Archie. Well, why?” Meghan said. She said she was never given an answer.

Harry and Meghan, Duke and Duchess of Sussex: Their relationship in pictures

Meghan also revealed that a story reported in the tabloids that she had once made her sister-in-law, Catherine, cry in a spat over the flower girl dresses for her wedding was actually “the reverse” — as in, Catherine made Meghan cry. She said Catherine later apologized and sent her flowers and a note.

Harry, meanwhile, said he was “disappointed” by his father and that, while he loves his brother William “to bits,” they’re on “different paths.”

Harry described an incident last year when the queen suddenly called off an invitation for the couple to visit, and he blamed the palace staff.

“When you’re head of the firm, there is people around you that give you advice,” he said. “And what has also made me really sad is some of that advice has been really bad.”

Roya Nikkhah, a royal correspondent for The Sunday Times, told “CBS This Morning” on Tuesday that the interview was  “certainly a crisis” for the British monarchy.

“That interview, and I’ve watched it twice now, has thrown out a lot more questions than answers,” she said.

According to Nikkhah, the interview is “proving extremely divisive” to Britons.

“I’ve just seen the results of a poll that’s just come out here, which shows that a lot of young people here actually support Harry and Meghan doing that interview,” she said. “And the older people are firmly, squarely behind the monarchy now. ”

Although Harry and Meghan praised Queen Elizabeth in the interview, Harry also told Oprah that he and Meghan had been invited to stay with the queen at her Sandringham Estate. However, when they arrived in London, Harry was informed by his secretary that the queen’s schedule was full, according to her own personal aide.

Elizabeth Elkind contributed to this report.