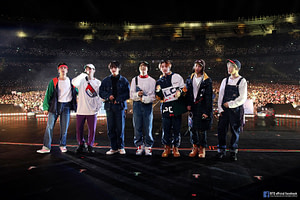 In concert | Photo: BTS Official Facebook
Big Hit Entertainment (the company behind worldwide phenomenon BTS) is changing its name to ‘HYBE’, causing quite a stir online—what does this mean exactly? Read on below:

Late last year, the Wall Street Journal named BTS as 2020’s Music Innovator. In an in-depth article, they discuss the meteoric rise not only of the South Korean K Pop group but also its mother company, Big Hit Entertainment.

Photo: BTS Official FacebookFounded in 2005, Big Hit was entering an extremely competitive industry dominated by the “big three” entertainment companies in South Korea: JYP, YG, and SM. It’s no secret that the world of K Pop can be quite torturous, with would-be idols undergoing years of training before even debuting, if at all. So, Big Hit’s success—which came in parallel with the upward trajectory of BTS—has become quite an inspirational story to many.

Everyone Loves An Underdog
In October of 2020, Big Hit Entertainment went through an IPO, which reportedly put Chairman and CEO Bang Si-hyuk’s equity holdings at an estimated 2.8 billion USD (135 billion PHP~). He is also part of Tatler Asia’s Most Influential: The Culture List released early this month.

At the forefront of the label’s success is BTS who were underdogs in their own right. Debuting in 2013, the group had difficulty breaking into the music scene in South Korea.

Bang Si-hyuk, Chairman and CEO of Big Hit Entertainment | Photo: bighitcorp.comThis led Big Hit to try new avenues in able to market BTS. Besides going through gruelling schedules of training and performing, the septet also had to participate in several variety shows in order to reach their audience. Among these, Run BTS! remains popular to this day with 132 episodes as of writing and the travel docu-series Bon Voyage with four seasons. The group also starred in a reality show called American Hustle Life in 2014, where they flew to LA to learn the ‘ins and outs’ of hip-hop.

from Bon Voyage 4 | Photo: BTS Official Facebook
Innovation Is Key
Eventually, the group made it big, allowing Big Hit to deepen its footing in the entertainment industry. In 2019, the company launched Weverse, a mobile app and web platform that hosts multimedia content from numerous artists. This was developed by Big Hit’s eponymously named tech subsidiary – Weverse Company formerly called beNX. It also expanded into e-commerce through Weverse Shop where artists are able to sell their merchandise and member-only content to subscribers.

When the pandemic hit, the label once again proved its capacity for innovation and ability to connect with audiences worldwide. In lieu of stadium tours around the globe, BTS held two virtual concerts entitled Bang Bang Con and Map of the Soul ON:E, which attracted 756,000 and 993,000 concurrent viewers, respectively.

Now at the top of their game—with BTS having been lauded as the top-selling artist of 2020—it seems like sky’s the limit for the band and Big Hit as well.

Related: BTS Suga: 13 Solo Tracks And Why We Love Them

from Map of the Soul ON:E | Photo: BTS Official Facebook

from Bang Bang Con | Photo: BTS Official FacebookWhat’s all the HYBE about?
Big Hit Entertainment just recently announced that they are changing their name to HYBE corporation. On the company’s website, it states, “…comforting and inspiring people around the globe through our music and artist, Big Hit Entertainment continues to make new innovations to the music industry business model. Big Hit strives to become the world’s best music-based entertainment lifestyle platform company”.

According to Variety, the decision is motivated by the company’s goal to expand its horizons, looking beyond artist management. Through this repositioning, Big Hit may also branch out to more lifestyle-oriented projects like real estate leasing, travel, communications, and the like.

Suga, J Hope, RM | Photo: BTS Official FacebookThe company has yet to issue a more elaborate statement regarding the decision; reports say this will be addressed in an upcoming general shareholders meeting on 30 March. In the meantime, it seems that although once the dark horse of the Korean music industry, Big Hit has become a vanguard of innovation not only in entertainment but also in the world of commerce and business.

As fans of the band and the company await more news, BTS continues to make history as the first South Korean act to perform at the Grammy’s which will be aired on 15 March 2021.

See Also: Where To Watch The 2021 Grammy Awards This Sunday

Although the name change has fans aflutter, it’s a sign of bigger and better things to anticipate from the company with music impresario Bang Si-hyuk at the helm.