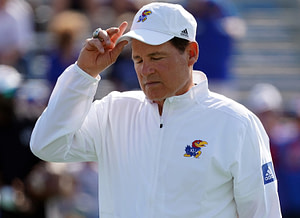 After the expected departure of Les Miles, who could be the next football coach at Kansas?

Kansas football needs a new head coach after parting ways with Les Miles but how attractive is the Jayhawks’ job?

As allegations of his behavior while the coach at LSU came to light, Miles was placed on leave as the football coach at Kansas. On Monday night, the subsequent move to move on was framed as a decision to part ways. In any case, Miles has surely coached his last football game.

Now, as spring practices get underway around the country, Kansas will be looking for a new football coach. Offensive coordinator Mike DeBord will continue to serve as acting head coach until an interim head coach is determined.

Miles came to Kansas with the expected hype, but (however expectedly) fell flat with a 3-18 record in two seasons. After the buzz of a 12-1 mark and an Orange Bowl win in 2007, and two more seasons under Mark Mangino (with a 13-12 in those two campaigns), the Jayhawks’ football program has had a decade-plus long run of ineptitude. Turner Gill (5-19), Charlie Weis (6-22), David Beaty (6-42) preceded Miles, with a 1-7 mark under interim head coach Clint Bowen after Weis was fired in 2014. It adds up to a 21-108 record over the last 11 seasons, with two winless marks and no more than three wins in any season.

The mess that is Kansas is not appealing to any coach who might be in line for a step up to a Power 5 school. That said, here are some candidates who might be willing to take on the task of rebuilding a long-running dysfunctional program.

After a very successful run at North Dakota State, Bohl is 38-44 in seven seasons at Wyoming. The Cowboys won eight games and made a bowl game three times in four seasons from 2016-2019, before a 2-4 record in the shortened 2020 campaign. The question for Bohl would be if he’d consider Kansas a step up, which says it all about the Jayhawks.

Elsewhere in the Mountain West, Norvell is 25-22 in four seasons at Nevada (22-13 over the last three seasons with three straight bowl appearances). He has Power 5 roots as an assistant, including time in the Big 12 at Iowa State, Nebraska, Oklahoma and Texas. Norvell is lined up to be a top candidate in the hiring cycle after next season, so he’s probably better off waiting for a better job than Kansas.

As Yahoo!’s Pete Thamel noted, Monken got interest from Vanderbilt and South Carolina in the last hiring cycle. The work he’s done building the program at Army, with the inherent challenges there, stands out. In three of the last four seasons. the Black Knights have won at least nine games with two 10-plus win seasons. He went to high school in Illinois, but it’s hard to tab how much those Midwestern roots would matter-to him or to Kansas.

Neu led the Cardinals to the MAC title in 2020, with (as Thamel called it) 16 “Super-Seniors” set to return this year among 20 returning starters they should be good again. Prior to landing at Ball State he spent time working in the NFL for the New Orleans Saints, first as a scout (2009-2011) and later as quarterbacks coach (2014-2015). Neu has led a rebuild, with a 15-33 record over his first four seasons, so that’s notable in regard to Kansas.

Leipold has surfaced as a candidate for a jump to a Power 5 job over the last couple of years, with interest from Vanderbilt, Tennessee and Illinois just recently. The Bulls are 24-10 over the last three seasons, with the program’s first bowl wins in the last two. Leipold has won MAC Coach of the Year twice (2018, 2020). At Division III Wisconsin-Whitewater, he went 109-6 with six national titles. Leipold is another candidate who is better off waiting for a better opportunity than Kansas.

If there’s such a thing as an ideal candidate for Kansas, and one who might take the job, Fritz looks to be it. In five seasons at Tulane he’s 29-33, but with three straight bowl bids and 20 wins over the last three seasons. Over the previous 20 years, the Green Wave made three bowl appearances.

Fritz played collegiately in the state of Kansas (Pittsburg State), then later coached high school and junior college within the state. Overall as a head coach (Central Missouri, Sam Houston State, Georgia Southern and Tulane), he’s got a 183-102 record. At a relatively advanced age (61 on April 2), an opportunity to coach at a Power 5 school next season might appeal to Fritz. But truly, he’s in a good situation at Tulane and he’d be foolish to leave it for the dumpster fire at Kansas.

For more NCAA football news, analysis, opinion and unique coverage by FanSided, including Heisman Trophy and College Football Playoff rankings, be sure to bookmark these pages.