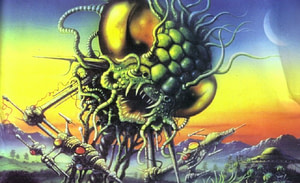 The story behind a genre-defining classic

[Update: The Monsters in the Dark Kickstarter has hit its target goal of $12,000. The crowdfunding campaign will remain open until April 8, at which point the book will go through its final proofing and publishing process. It will launch in digital format soon thereafter, with a physical paperback to follow in summer 2021.]

A Kickstarter campaign has been launched for a new book that will tell the story behind the development of 1994’s X-COM: Enemy Unknown, (released in North America as X-COM: UFO Defense and also as UFO: Enemy Unknown in Europe), the first release in the genre-defining strategy series that is still zapping aliens and fending off intergalactic invasions to this day.

Monsters in the Dark: The Making of X-COM: UFO Defense is an independently produced book by author David L. Craddock, who previously penned the excellent Stay Awhile and Listen series, recounting the formation of Blizzard Entertainment and Blizzard North, as well as the development and launch of the legendary Diablo series

“I read David Craddock’s book, Stay Awhile and Listen, and I thought it was quite an intricate, deep-dive into the inner workings of Blizzard Entertainment,” said X-COM co-creator Julian Gollop. “I would like to see the X-COM book as kind of a historical record of a game that was influential. Hopefully, it can provide some inspiration, and also some fascination for how things were done in the early days of the games industry- and in some cases, how badly things were done as well.”

Monsters in the Dark will trace Gollop’s career from his formative years creating pen-and-paper adventures, to his work on ZX Spectrum games – such as 1985’s Chaos: The Battle of Wizards and 1988’s Laser Squad – to the ultimate conception, design, and development of X-COM: UFO Defense. Despite X-COM’s now invaluable contribution to the strategy genre, Monsters in the Dark will recount the title’s torrid development, and how the legendary release came within a hair’s breadth of being consigned to the cancellation pile.

While Monsters in the Dark is already written and edited, Craddock is looking for $12,000 in crowdfunding capital in order to pay for third-party proofing & editing, as well as printing and publishing costs. Should the Kickstarter reach its goal, then Monsters in the Dark is expected to see publishing in a relatively short space of time, with digital copies tentatively scheduled to release within weeks of the campaign’s closure. This will then be followed by the release of a physical paperback, which is expected to arrive late-June.

For more details on Monsters in the Dark: The Making of X-COM: UFO Defense, check out the official Kickstarter campaign right here.

READER COMMENTS LOADING BELOW…LET’S KEEP THE COMMUNITY GREAT
You’re not expected to always agree, but do please keep cool and never make it personal. Report harassment, spam, and hate speech to our community team. Also, on the right side of a comment you can flag nasty comments anonymously (we ban users dishing bad karma). For everything else, contact us!