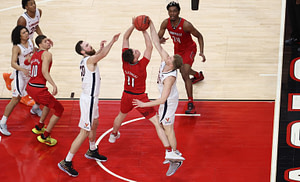 LOUISVILLE, KENTUCKY – MARCH 06: Quinn Slazinski #11 of the Louisville Cardinals shoots the ball while defended by Jay Huff #30 and Sam Hauser #10 of the Virginia Cavaliers at KFC YUM! Center on March 06, 2021 in Louisville, Kentucky. (Photo by Andy Lyons/Getty Images)

The ACC is typically the best NCAA basketball conference, but how many teams will the league see play in March Madness?

The ACC isn’t as strong as it once was, ceding its place near the top of the conference hierarchy to the Big Ten and the Big 12. There isn’t a clear-cut national title contender in the conference, but that doesn’t mean the ACC will be hurting for representation in March Madness.

The ACC Tournament will be a very important fixture in Championship Week for the bubble watch since several of the league’s teams find themselves pretty close to the cut line. Let’s break down how many bids the ACC could receive by sorting its teams into one of four categories: locks, should be in, bubble, or out.

The Cavaliers might be a bit underwhelming but they have done enough good work in the regular season to secure their ticket to try and defend the national championship. Winning the ACC Tournament could get Virginia as high as a 3-seed with a 5-seed a likely floor for Tony Bennett’s team.

Florida State looked like they had an outside shot to land on the two-line but losses in two of their past three games have hurt the Seminoles’ seed line. Like Virginia, a 5-seed appears to be the floor for Florida State and they should be able to get back inside the Top 16 with a good showing in Greensboro.

The last ACC lock is Clemson, which recovered nicely from a midseason swoon by winning six of their final seven games. The Tigers can also point to quality wins over Purdue and Maryland in non-conference play as a strong case to end up with a five or six seed in the NCAA Tournament.

March Madness – ACC should be in teamsVirginia Tech

The Hokies are by themselves in this class since a late-season COVID pause wiped out a lot of their games against other tournament-worthy ACC teams. Wins over Virginia and Villanova are a solid starting point for Virginia Tech’s resume and they are likely to end up in an 8-9 game if the field was selected today.

Louisville is closer to should be in status but a lengthy COVID pause cost them some games to improve their seeding. A loss in their first ACC Tournament game shouldn’t cost the Cardinals a tournament berth but it could push them down a seed line or two.

Georgia Tech has been the ACC’s hottest team, playing its way off the bubble and into the field with a strong finishing kick. Wins over Clemson, Florida State and Virginia Tech are lifting the Yellow Jackets’ resume, which looks better thanks to a season-ending four-game winning streak, and their placement as the No. 4 seed in the ACC Tournament should prevent an opportunity at a third bad loss to go besides season-opening defeats to Mercer and Georgia State.

There is no question that North Carolina underachieved relative to their preseason hype but the Tar Heels mostly took care of business in the ACC, beating who they were supposed to and losing few bad games. Stinkers to Marquette and NC State hurt but as long as North Carolina doesn’t fall in their first ACC Tournament game to either Notre Dame or Wake Forest they should avoid the First Four.

Syracuse is firmly on the bubble right now, with wins against Virginia Tech, North Carolina and Clemson making their case decent. Getting swept by Pittsburgh is a problem for the Orange, who have a must-win game against NC State in the ACC Tournament before getting a shot at Virginia. Knocking off the Cavaliers and getting to the semifinals would make Syracuse a team to watch over the weekend.

The last team in this class is Duke, which is here on name value only since there’s a chance they could get to the ACC Tournament final and get an unworthy at-large berth. The Blue Devils’ only real chance to reach the field is through the automatic bid, which could mean going through Boston College, Louisville, Florida State, Virginia Tech and Virginia in succession to go dancing.

How many ACC teams will go to the NCAA Tournament?In the end, there are seven teams that should be going to March Madness at the moment out of the ACC: Virginia, Virginia Tech, Louisville, Florida State, Clemson, North Carolina and Georgia Tech.

The league’s best chance at an eighth bid comes from Syracuse, which needs to win at least two games in Greensboro and get some help in order to end up on the right side of the cut line.

The absolute best-case scenario for the conference is nine teams, which would involve Syracuse making a deep run and Duke winning the automatic bid, but that is extremely unlikely. The smart bet is for seven teams to be in the field on Selection Sunday.

For more NCAA basketball news, analysis, opinion and features, check out more from the FanSided college basketball section to stay on top of the latest action.