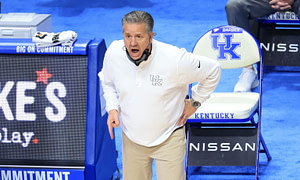 LEXINGTON, KENTUCKY – FEBRUARY 13: John Calipari the head coach of the Kentucky Wildcats gives instructions to his team against the Auburn Tigers at Rupp Arena on February 13, 2021 in Lexington, Kentucky. (Photo by Andy Lyons/Getty Images)

Duke and Kentucky missed the NCAA Tournament so March Madness will take place without two of the biggest programs in the history of NCAA basketball.

The NCAA Tournament is set to start this week and it will be unusual for reasons beyond the fact it is being staged in the middle of a global pandemic. A quick glance at the field shows that Duke isn’t in the field for the first time since 1995 while Kentucky is also MIA, finishing well below .500 to fall short of even the NIT.

The Blue Devils and Wildcats weren’t alone in terms of blue blood struggles this season. Indiana missed the field entirely. Michigan State needed a late surge in Big Ten play to sneak into the field while North Carolina, UCLA and Louisville were among the traditional powerhouses to underachieve compared to their lofty standards.

That offseason period is very valuable for blue bloods like Duke and Kentucky, which have heavily utilized the one-and-done rule to recruit some of the nation’s most talented freshmen to fill out their starting lineups. While it is true that neither the Blue Devils nor Wildcats put together as strong a class as they usually do, a typical offseason would have provided plenty of time for Mike Krzyzewski and John Calipari to help their teams gel ahead of the regular season.

Removing that training period reduced the runway for teams to figure out how to get these talented individual players to work together as a unit, meaning that the non-conference portion of the schedule ended up serving as a de facto training camp for most teams. Calipari had a tremendous belief in the talent of his players and scheduled aggressively in the non-conference season, adding games against Georgia Tech, Louisville, Richmond and Notre Dame to go along with previously committed matchups against Kansas and North Carolina.

The Wildcats lost all six of those games, putting themselves in a deep 1-6 hole before SEC play even began. There were also chemistry issues with Kentucky since one of the few returning veterans on Kentucky’s roster, forward Keion Brooks, missed several weeks with an ankle injury as the team’s struggles continued.

Calipari even temporarily dismissed freshman Cam’Ron Fletcher from the team as he felt that Fletcher’s attitude was a poor influence on the rest of the Wildcats. Fletcher was reinstated less than a week later, but Kentucky was never able to get going in SEC play either, struggling against a challenging schedule as teams like Alabama, Missouri and Arkansas surged to join Tennessee, Florida and LSU as tournament threats in the conference.

Duke experienced a few similar problems as Kentucky, but Krzyzewski knew something was wrong as soon as the Blue Devils dropped home games to Michigan State and Illinois in non-conference play. Thinking that his team needed a mental break, Krzyzewski canceled the remainder of Duke’s non-conference schedule in mid-December to allow his team to recharge ahead of ACC play.

The move backfired as the Blue Devils struggled to get into a regular rhythm, suffering a pair of key three-game losing streaks in January and early February. The losses themselves featured some uncharacteristic defeats from a Duke team, including a loss to a short-handed Miami team that had been ravaged by COVID infections as well as a home defeat against a struggling Notre Dame squad.

Krzyzewski also struggled to figure out the right rotations for his team, a problem that was exacerbated by the shortened preseason and his decision to cancel three non-conference games the Blue Devils could have used as tuneups for the ACC schedule. A big part of the problem also involved a strange relationship with talented freshman Jalen Johnson, who missed time with an injury but never seemed to fit in with Duke’s culture.

Johnson left the program in late February, opting to focus on preparing for the NBA Draft instead of helping the Blue Devils make an NCAA Tournament push. Duke began to play better basketball at that point, scoring critical wins over Virginia and Syracuse to bolster their tournament hopes, but another three-game losing streak at the end of the regular-season left the Blue Devils at 11-11, meaning they needed to essentially win the ACC’s automatic bid in Greensboro to go dancing, which didn’t happen after a positive COVID test caused Duke to withdraw prior to a quarterfinal matchup with Florida State.

It will be interesting to see if this year is simply an outlier fueled by the pandemic or a sign of things to come for the college basketball power structure. It’s unlikely that the blue bloods will go away anytime soon but the fact remains that one of them is highly unlikely to win the NCAA Tournament unless Kansas finds a way to stun the field as a No. 3 seed.

For more NCAA basketball news, analysis, opinion and features, check out more from the FanSided college basketball section to stay on top of the latest action.