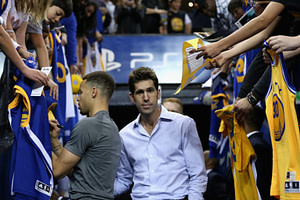 In this week’s NBA Power Rankings, we’re looking at which teams have the most leverage as we approach the all-important trade deadline.

Our new look NBA Power Rankings are back, a non-traditional structure for a non-traditional era of professional basketball. The world is no longer just about wins and losses and teams are no longer the primary crucible of basketball power. So each week we’ll be dissecting how basketball power is presently distributed — between players, teams, friendships, diss tracks, aesthetic design choices, across leagues and whatever else has a temporary toehold in this ever-changing landscape.

Who has the power in this week’s NBA Power Rankings? 5

Houston and their vets

On paper, the Houston Rockets hold a lot of cards. Victor Oladipo may be as closer to a star player as there is on the market. Eric Gordon has a track record as a solid defender, strong floor-spacer and respectable secondary creator. And P.J. Tucker has been a key playoff performer, stretching the floor and switching to guard all five positions. The problem is that Oladipo is going to be a free agent so any team seriously interested in him could just wait, Gordon has been injured and still has three years left on his deal and word on the street is that Tucker may be “cooked.”

The Houston Rockets could make a lot of things happen for a lot of teams vying to make the inner circle of championship contenders. But they might not love the offers they’re getting for the leftover parts from their own contender core.

The Cavs and their bigs

The Cavaliers have four big men with vastly different skill sets, none of whom are likely to be part of their long-term plans. JaVale McGee, Andre Drummond, Larry Nance Jr. and Kevin Love could all be intriguing to different contenders for different reasons but there should be multiple suitors for each and the Cavs have the luxury of sifting through the offers for whatever they fancy the most.

The downside is that the market will constrict around each. Drummond is an expiring and a contender might not want to throw down a big offer for a one-year rental. Nance Jr. has arguably been the best of the bunch but the Cavs may prefer to just keep him. And Love’s contract and injury history will depress the offers Cleveland gets for him. All four could be moved in the next few weeks and with this pool of players, the Cavs could heavily impact the playoff fortunes of teams like the Lakers or Brooklyn Nets. But the returns they get might end up being a little disappointing.

The Thunder may not have anything, in particular, they’re looking for or any pressure to try and make anything happen. But they have, by far the largest array of pieces to offer. They own all of their own future first-round picks and hold the rights to nine extra first-rounders over the next seven drafts. If a star player should become available, they’ll be ready to pounce. In addition, they have several enormous trade exceptions and three veterans — George Hill, Al Horford, Trevor Ariza — who could be extremely valuable to fringe contenders. And if they want to really go big, they could even move some of their emerging young players like Darius Bazley or Theo Maledon.

Even if they’re not in the center of any deals, their combination of players and financial flexibility could let them hop in around the margins, helping facilitate some other deal while they pick up an additional asset or two for their trouble. The trading game is all about assets and the Thunder have, by far, the biggest war chest.

The Philadelphia 76ers have been one of the few consistently impressive teams in the Eastern Conference. Joel Embiid is near the top of the MVP shortlist and their defense has been in the top five in efficiency almost the entire season. But while their offense has looked better with all the supplementary shooting Daryl Morey brought in during the offseason, they’re still roughly league-average at that end of the floor and will almost certainly be looking for an upgrade at the deadline.

The 76ers don’t have a ton of obvious assets but they have the impetus to make a trade, an incredibly creative and aggressive general manager, and the depth to make a lot of different trade paths possible. Whoever they target will need to be a respectable shooter but anything from a stretchy big like Nemanja Bjelica to a rangy backcourt player like George Hill would help. They’ll want to do something and it feels like everything is on the table.

With Bradley Beal and Zach LaVine likely off the NBA Trade Market, the Timberwolves’ 2021 first-round pick, held by the Warriors, could be the most valuable piece in play. The pick is top-three protected which means there’s roughly a 50 percent chance it’s not conveyed until the 2022 NBA Draft, in which case it becomes unprotected. Given how chaotic things are in Minnesota right now, the pick certainly isn’t going to decrease in value.

The Warriors don’t have any real pressure to make a deal right now, so they don’t need to take a risk. It would take a significant upgrade to make them even longshot contenders and everything is really about next season when Klay Thompson is healthy again. They can sit on the pick and see where Minnesota lands in the lottery and then reassess before the draft.

But if the Warriors want to get involved with anyone who becomes available, that Timberwolves pick is going to trump most other offers on their own. Kristaps Porzingis has been inconsistent this year but he’d been even more dangerous offensively surrounded by Curry, Klay and Draymond. John Collins would be awfully interesting as a long-term 4. Maybe they want to try and get the Orlando Magic to change their minds about Aaron Gordon or Nikola Vucevic. The Warriors don’t have to do anything but they have more flexibility to turn a plan into reality than almost any other team.