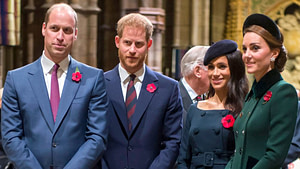 Not sitting well. Prince William and Prince Harry’s relationship will be affected by the claims made in the former pilot’s CBS tell-all interview, royal expert Katie Nicholl claims.

“William is devastated by this interview,” Nicholl told Entertainment Tonight on Monday, March 8, after Harry and Meghan Markle’s explosive sit-down one day prior. “Don’t forget that the Duchess of Cambridge is being dragged into this whole saga and William will hate that.”

Harry, 36, and Meghan, 39, spoke candidly about their fallout with the royal family during the Sunday, March 7, CBS interview and the bonus clip that aired on CBS This Morning on Monday.

Prince William, Prince Harry, Meghan Duchess of Sussex, Catherine Duchess of Cambridge at the National Service to mark the Centenary of the Armistice at Westminster Abbey in London on November 11, 2018. ShutterstockThe former Suits star specially addressed a story in which the tabloids claimed that she made Duchess Kate, 39, cry, saying, “The reverse happened.”

According to Meghan, after a disagreement about Kate and William’s daughter Princess Charlotte’s bridesmaid dress ahead of her 2018 nuptials, the California native ended up in tears. She noted that the Duchess of Cambridge apologized, but the press twisted the story and made allegations that Meghan was the instigator, which she claimed the palace didn’t correct.

“That was a turning point,” Meghan said on Sunday about the news stories, which surfaced six months after the actual event. “The narrative with Kate, it didn’t happen. A few days before the wedding she was upset about flower girl dresses and it made me cry. It really hurt my feelings.”

The philanthropist continued: “It was a really hard week of the wedding and she was upset about something, but she owned it, and she apologized. And she brought me flowers and a note, apologizing. And she did what I would do if I knew that I hurt someone, right, to just take accountability for it.”

Nicholl said that William, 38, however, will not be happy that his wife was discussed at all during the sit-down.

“I think that the idea that Kate’s being dragged into this will be upsetting for Kate who behind the scenes has tried really hard to be a peacemaker between William and Harry,” the royal expert explained on Monday. “She has been deeply saddened by the brothers’ falling out. Don’t forget she was incredibly close to Harry herself.”

Meghan pointed out on Sunday that she only shared her side of the story to highlight how the institution allegedly didn’t protect her and correct the narrative at the time.

“I’m not sharing that piece about Kate in any way to be disparaging to her. I think it’s really important for people to understand the truth,” she said. “She’s a good person. And I think so much of what I have seen play out is this idea of polarity, where if you love me, you don’t have to hate her. And if you love her, you don’t need to hate me.”

Nicholl also addressed Harry’s comments about William and their father, Prince Charles, where he claimed they were “trapped” by the institution.

“Harry was born in a very different role than William — he was born the spare, William the heir. William has always known what his duty and birthright has been,” she said. “There are times certainly when William has struggled with his birthright, but to suggest that he’s trapped in the institution, I don’t think it’s true and I don’t think it’s probably Harry’s place to say in any case.”

While Harry did speak out about his brother being stuck in his role in the family, he also noted that he loves him “to bits,” adding, “We’ve been through hell together. I mean, we have a shared experience. We’re on different paths.”

Listen to the Royally Us podcast for everything you want to know about our favorite family across the pond.