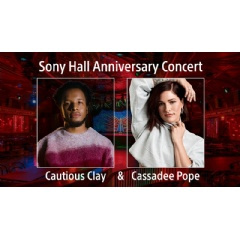 Sony Corporation (“Sony”) today announced that it will hold an online charity concert on March 27 at Sony Hall (NYC, US) featuring Cautious Clay and Cassadee Pope, artists from The Orchard, a leading global distributor and wholly-owned subsidiary of Sony Music Entertainment , to benefit the National Independent Venue Association Emergency Fund.

The use of live music venues and concert halls has been restricted worldwide since last year due to the continuous spread of the COVID-19 infection. While it has become difficult for many artists and musicians to deliver live performances to audiences, Sony Hall has been streaming concerts with no audience since last October. Using Sony’s “BRC-X1000” 4K Pan Tilt Zoom Camera installed in the hall, the concert can be filmed by a small number of staff members and delivered to music fans in high quality.

Online concert tickets will be offered free of charge, and Sony will make a donation to the National Independent Venue Association (NIVA) Emergency Relief Fund as well as contribute an additional amount for every person who shares the announcement post made on Sony’s official SNS, and for the number of people who stream the concert. Anyone can participate in this charity by sharing our post. Sony believes it is important to protect live music venues and concert halls, and endeavors to do its part into supporting artists and the creative community. The NIVA Emergency Relief Fund provides grants to independent venues at greatest risk of closing indefinitely due to the pandemic shutdowns. It is for this reason that Sony has decided to support NIVA.

“Last year, many events were canceled, and it was a year in which we acknowledged that entertainment has the power to enlighten everyone’s hearts. Sony’s Purpose is to fill the world with emotion, through the power of creativity and technology. We plan to continuously support the young artists by serving chances to perform, and also hope to create chances for music fans have an enjoyable experience.”

“When we closed Sony Hall in mid-March of 2020, we never predicted that over a year later we would still be unable to open our doors to music fans. And while we have been eager to put on live shows again, safety is our biggest priority. So in October, we began streaming concerts live from Sony Hall and we plan on continue doing so to stay connected with our audience until it’s finally safe to reopen again. As an independent venue, it’s important to us that we do our part to support the live music community and that means providing a safe platform for young artists to perform in. We are lucky that Sony also shares this belief and are supporting this concert.”

Sony Hall opened in 2018 in the heart of New York’s Theatre District (235 W. 46th St at the Paramount Hotel, in the space previously known as Diamond Horseshoe), and is owned and operated by Blue Note. Sony Hall presents world renowned performing artists across all music genres at capacities of 1,000 standing and 500 seated, with a full-service restaurant and bar. Sony Hall is equipped with Sony’s technologies integrated throughout the 12,000 square-foot venue to deliver enhanced entertainment experiences to audiences.

This news content was configured by WebWire editorial staff. Linking is permitted.