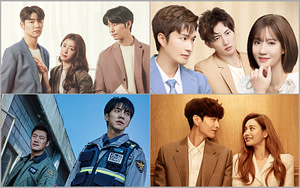 (Clockwise from top left) ‘How to be Thirty,’ ‘In Love with Your Dimples,’ ‘Oh! Master’ and ‘Mouse’ (iQiyi)Popular and rising Korean and Chinese female stars are on spotlight in some of the latest shows on video streaming platform iQiyi International this March, which is celebrated as Women’s Month.

Here are some of the Asian dramas and female characters to watch on iQiyi this month:

In “Court Lady,” Chinese actress and singer Li Yitong joins actor Xu Kai in a romantic comedy period drama set in the Tang Dynasty. Here, Xu Kai’s character, a rich playboy, decides to turn over a new leaf after falling in love with the beautiful businesswoman played by Li Yitong.K-pop idol and actress Nana stars as a popular comedian who is the love interest of a TV script writer played by Lee Min-ki in the iQiyi original and exclusive “Oh! Master,” a romantic comedy about two people who don’t seem to know how to fall in love until they have lived together.In “How to be Thirty,” Korean actress Jung In-sun plays the role of Seo Ji-won, a 30-year-old webtoon author who meets her publisher and first love from middle school, Lee Seung-yoo (played by actor Kang Min Hyuk) again. This iQiyi exclusive romance drama centers around the work and love lives of women who have just entered their 30s. The cast includes EXID member Hani, Song Jae-rim, Cha Minji and Baek Sung-chul.Award-winning actresses Kyung Soo-jin and Park Joo-hyun join actors Lee Seung-gi and Lee Hee-joon in the awaited Korean thriller “Mouse,” which follows the characters’ journey to justice in the wake of ruthless serial murders which have thrown the entire nation into chaos.In sci-fi love story “Unusual Idol Love,” Jinian, a hardworking girl who works for an entertainment magazine played by Chinese actress Lu Xiaoyu (also known as Rain Lu), is the love interest of hit idol Hu Li (played by Ao Rui Peng), who realizes that he is a robot that is about to be destroyed because of irreparable issues. When Hu Li loses his memory and shows up outside Ji Ninan’s home, she takes him in out of pity and a story of fantasy and romance between them unfolds.Chinese actress and singer Li Qin (also known as Sweet Li) hits it off with actor Johnny Huang in “My Dear Guardian,” a warm C-drama about a gentle military medic and an “ice mountain” military officer who find love as they fulfill their duties.In “In Love with Your Dimples,” Tang Shuang Li (played by Estelle Chen) tries desperately to move on from “three losses” by trying to be an “ordinary person” but ends up attracting the interest of three different men at the same time.“Dramaworld 2” is an Asian drama-themed show about Claire Duncan (played by Liv Hewson), a huge fan of Korean dramas. Other cast members include Super Junior-M’s Henry Lau, Daniel Dae Kim and Sean Richard.Viewers can access these releases for free on iQiyi International’s website at iQ.com or on the platform’s free mobile application that can be downloaded from the Apple Store or Google Play Store. For access to new episodes as they drop, viewers have the option to sign up for weekly Standard VIP subscription at P49, or monthly Standard VIP account at P99 or a Premium VIP account at P249.