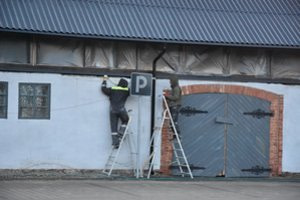 According to the data of the Employment Service in January, unemployment in Lithuania reached 16.1 per cent, at that time Statistics Lithuania informs that at the beginning of the year 9 per cent. unemployment. Assessing the differences between the presented data, I.Genytė-Pikčienė stated that it is worth noting that dawdle measures different indicators in this case.

At the time of the survey, the population seems to be more inclined. to say what the real situation is, unemployment registered at the Employment Service at the time is the number of registrants encouraged by many government initiatives this year: both the various pandemic unemployment benefits and the incentive for younger students to register and receive unemployment benefits

So there were a lot of circumstances that would encourage you to simply register, and this blew up the unemployment rate of the Employment Service, “said the economist.

I.Genytė-Pikčienė noted that “the growth of the unemployment rate between 2020 and 2019 is not very high.”

“As you know, we can always compare with the crisis of 2009, when we really saw a very significant decline in labor market efficiency and a jump in unemployment. In 2010, the unemployment rate in Lithuania reached almost 18 percent. This is a really high threshold because one in five people of working age did not have a job. Now the situation is much better, “she said.

However, the economist noted that in the context of the EU, the growth of unemployment in Lithuania was one of the fastest.

“However, in the context of the EU, we see that unemployment in Lithuania has been growing almost the fastest, because other countries have applied various government measures to the labor market.

The overall EU unemployment rate has risen very slightly and was already in the third quarter of last year. 7.5 percent In this case, Lithuania did not cope with this challenge so well and, apparently, various delays in measures related to the preservation of jobs and delays in procedures during the first quarantine contributed to it, “said I.Genytė-Pikčienė.

“However, in terms of overall labor market activity and employment and redundancy trends, last year was by no means critical, as the balance between redundancies and redundancies remained almost in balance,” she added.

According to the economist, the fact that the most affected sectors in the Lithuanian economy were not very significant saved .

“And, apparently, this is due to the fact that the economic crisis caused by the pandemic in Lithuania is highly localized in certain sectors that are most affected, but in principle in the general structure of the economy they form a very insignificant part. And the rest of the economy remains dynamic and labor relations, labor market activity there remains healthy and unchanged, “she said.

the fact that the long-term unemployment rate was 2.5% last year compared to 2019, I. Genytė-Pikčienė, said, dawdle this is a welcome low indicator.

“Long-term unemployment remains very low, and that is good news, as long-term unemployment is already a structural problem in the economy. Usually, people who do not find a job for a delayed time also acquire certain phobias, their competencies become obsolete and various additional problems arise when they re-enter the labor market.

So the low percentage is really welcome, and in a pandemic period, that increase is not significant. Let’s hope that we will continue to be able to maintain such a situation, “she said.

“Apparently, we will see some increase, because, as we know, quarantine continues not from January, but was announced in November last year, tightened in December, and some companies did not receive any government support for a month and a half to maneuver during that time. Some of them may have had various difficulties in surviving, and apparently for some it was a critical period, “she said.”

“Let’s hope that, as the epidemiological situation improves, the gradual opening up of the economy will gradually begin and small businesses that have been forced to close during quarantine will be able to return to their normal activities and earn a living in order to function, survive and retain workers, ”added I .Genytė-Pikčienė.

According to the data of the Department of Statistics, the unemployment rate in the fourth quarter of last year was 9%, and the long-term unemployment rate was compared to 2019, increased by 0.6 percentage points and amounted to 2.5%

At that time, the Employment Service announces that that at the beginning of January 16.1% of the unemployed were registered in the country