Nearly a year after thousands of former President Trump supporters stunned the nation by violently storming the U.S. Capitol, concern remains about the current state of American politics, a University of Michigan political expert says. 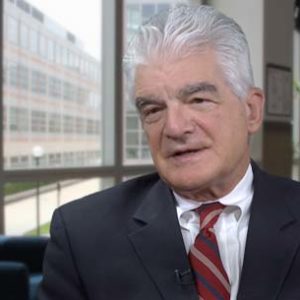 Michael Traugott , professor emeritus of communication studies and political science and research professor emeritus at the Center for Political Studies, says the Jan. 6 insurrection—where many voters wrongly believed there was fraud in the 2020 presidential election—was an assault on democracy not seen since the War of 1812. What it means for politicians in both parties as they maneuver for power in the 2022 and 2024 elections remains to be seen, he says.

What is the historical significance of Jan. 6?

Donald Trump built the “Big Lie” around a growing distrust in government and other important American institutions in a significant portion of the population, in conjunction with his interest to void an electoral result that would remove him from office. But the real consequence of mobilizing the group that showed up in Washington, D.C., was to threaten a fundamental principle of democracy—when you lose an election, you concede to your opponent. If you are an incumbent, you leave the office with grace, including attending the inauguration of the winner.

The incidents in Michigan were a precursor in the sense that Donald Trump promoted a series of wedge issues like gun rights and abortion, and in several locales organized groups held gatherings under open carry. In Michigan, a smaller group allegedly organized to kidnap Gov. Gretchen Whitmer because they disagreed with some of her policies. However, these seem like small events compared to what seems to be the level of organization associated with the events of January 6.

Trump and many Republicans have downplayed what happened at the Capitol. What could be the repercussions, especially with 2022 as midterm elections?

The Republican Party has become less interested in policy and more interested in seeking and retaining power for some time. In 2020, the nominating convention did not adopt a platform, and they are proposing that the RNC not issue any platform-like statement for 2022.

For some time, one of the main differences between the two parties is that the Democrats have been interested in expanding ballot access while the Republicans have been preoccupied with nonexistent election fraud and as result restricting access to the ballot and modifying the ways in which they are tabulated. This has sped up since the 2020 election at the state level where Republican-controlled legislatures in 19 states have passed 34 such laws to date. This effort is designed to tilt the 2022 results in the direction of the Republican Party and candidates.

In addition, we have to observe how many new political appointees join the election administration workforce. The Republicans at the state level are trying to make as many appointments as possible with their new laws and revise the tabulation procedures. These new laws will be tested using the court systems.

Do you expect another insurrection to occur if a group doesn’t like an election outcome?

This will depend on how our legal system functions because gridlock in Congress means there is unlikely to be any federal legislation to correct the current situation. If the current prosecutions result in enough convictions and lengthy sentences, that should be enough to mitigate the possibility of another large-scale national event.

Copy this html code to your website/blog to embed this press release.

Bringing the sun into the lab

Mike Ledbetter Announces His Candidacy for President of the United States for 2024 and His New Book, Nine Sovereign Kings: The Return of God

How Abortion Has Changed Since 1973

We will be happy to hear your thoughts

Login with your Social ID
Our Portfolio

Product categories
Deal of the day

What is the speed of light?

How Infinite Series Reveal the Unity of Mathematics

Sparkling Gems from the Greek Electronic Edition: A Must-Have Tool for Your...